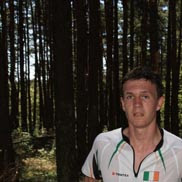 Orienteering in the Olympics?
Maybe this is as close as we will get to orienteering in the Olympics for the foreseeable future, but congratulations to Fingal's Fiach O'Rourke who was an Olympic Torch Bearer on 28th May in Wales. Fiach, a student at Bangor University, represented Ireland as a Junior at orienteering and has brought orienteering back to life in Bangor University, as well as badminton and squash. (The previous O-club, Bangor Backwoodsmen, must have folded?).
You can read Fiach's nomination here. (Thanks to Marcus Geoghegan for noticing this!).

Irish 3-Day
The June Bank Holiday weekend will see three new maps near Oughterard in Co. Galway used for the first time by Western Eagles Galway Orienteers. The word is - keep in contact with the map! Intricate open hillside on three adjacent areas, mapped by Pádraig Higgins and with courses planned by Ed Niland, Martin Flynn and Paul Dunne should set good challenges to the 160-odd orienteers entered. Unfortunately the Irish World Championships team selection races are in Scotland at the same time, so most of the Elites are missing. Lots of potential UK orienteers have also been lured away by several very promising events in Scotland over the weekend.
Saturday sees short courses with starts from 4 pm, Sunday will have classic distance courses (the M21L is  9.6 km with 300 metres climb) and Monday will have slightly shorter courses with a chasing start.
Several regular visitors will be back again, with the locals who decided to give the Irish Champs a miss. Runners from the UK, USA, Sweden, Ukraine and Switzerland will add to the local colour
Details of the event are here.
Somewhat confusingly, the pre-event information says "All rock features are not mapped". Mmm ...


New IOA Chair
Mary O'Connell, former IOA Treasurer, has been co-opted onto the Executive as the new Chairman. At the AGM in Castlegregory the call was put out looking for a replacement for Brendan O'Brien, who had served the maximum three years, and Mary responded. Having been on the Executive before is a very useful attribute for an incoming Chairman.
Mary (3ROC) is a familiar face at events around the country and abroad. Her son, Colm Moran, is  coming towards the end of a year training in Sweden and was selected for the JWOC team for Slovakia. (Of course I have to mention that up-and-coming junior, daughter Clodagh Moran here too!) Best wishes, Mary, on your ratification!


Junior International Teams
Congratulations to the members of the two Irish Junior teams travelling abroad this summer: the European Youth O-Championships in Correze in France are at the end of June (see here for details) and the Junior World Championships are in Slovakia at the beginning of July (see here).


Junior Tour
The Irish Junior Squad tour is travelling to the Welsh 6-Day, Croeso 2012, in Aberystwyth from July 22-28. 1700 entries have so far been reveived for the event, which will feature Welsh open hillsides, forest and urban orienteering. Entries are still open and you can get details here.


European Championships
The Irish team at the European Championships at Falun in Sweden in May got some good preparation for July's World Championships in Switzerland, running all the disciplines (Sprint, middle, classic and relay) in varied continental terrain against top class opposition. The team was Roz Hussey (DUO), Niamh O'Boyle (CNOC), Nick Simonin (BOC), Dave Healy (GEN) and Hugh Cashell (CNOC), with all except Roz now Swedish-based. Both Nick and Roz qualified for the Sprint final. You can all read all about the week here.
Gerard Butler (3ROC) had to withdraw from the team following the death of his mother. Our sympathies go to Gerard and to his father, Michael, on the death of Toni.


The Tollymore Festival of Orienteering - June 15-17, Co. Down.
Details of this 3 day event are now available here and entries can be made at Fabian.co.uk here.
The weekend includes the Veteran Home International with camping available in Tollymore on the Friday and Saturday nights and a barbecue on the Saturday night.
Please note that this is a pre-entry event with entries and bookings closing on Sunday 10 June.
Harold White, Event Coordinator
(The Veteran Home International team selection is still to be announced).


Summer O-Series-es
There are several series of local events on over the summer: in Leinster the CNOC Tuesday evenings continue until June 19th in Hollywood; CorkO's summer series continue on Tuesday evenings until James's Fort on July 17th; the North Cork Orienteers events are on Wednesday evenings until 27th June at Ballyhass Lakes; LVO's WEE (Wednesday Evening Events) series run until 29th August at Stormont; NWOC's ThEE (Thursday ... you get the picture!) events run until 14th June at Downhill and Fermanagh are finishing up their TES (yes, you've guessed it!) events on Tuesday 5th June at Florencecourt.
Details of these events are in the fixtures section of the IOA and NIOA web sites.

Watch out too for a series of 3ROC events in Dublin's Phoenix Park on Tuesdays in August and Fingal's Scatter event series in North Co. Dublin in September.

And, for a family day out, there's the Athletics Ireland Family Fun Day at Farmleigh, beside the Phoenix Park on Sunday July 1st, featuring basic orienteering as well as lots of other activities. Details here.


Finally, Good Luck to all our orienteers doing school and college exams around now: they'll be over before you know it, then off to EYOC, JWOC, Wales, O-Ringen, Austria, Norway ...

I think the "All rock features are not mapped" phrase is used in the same way that the TV license add uses the phrase "One of them is not by interperative dance". It was late when I proof-read the copy.