Easter orienteering in the Czech Republic: shorts and T-shirts, sunlit forests with limestone pillars reaching to the sky ... it sounded idyllic. A group of similarly optimistic orienteers signed up for the trip to the Hana Orienteering Festival, organised by Greg McCann, as part of the preparation for the Junior World Championships in July.
Looking at the web site for the event, the fact that we were to be based in a ski resort should have rung some alarm bells, as should the 10-day weather forecast for temperatures of -3 to +3 with wet snow and the Christmas card images from the webcams.
The trip was to include some training days, then a three-day competition and another training day, all in terrain like the JWOC. The competition and training areas were on the Czech/Polish border at Zlaté Hory, about 6 hours drive east of Prague, in a depressed former gold mining area (Zlaté Hory means "gold mountain"). We did wonder why there were two 3-day events on in the country over Easter but we found that the Czech roads are like the Welsh ones: they are slow and they don't go to where you want.
The competition centre was a soviet-era former workers' holiday camp which provided  accommodation in blocks for the runners, at least with plentiful heating and hot water, and a central dining room and socialising area. The whole thing was organised locally by a very energetic and charismatic guy called Robert Zdráhal, who was one of the instigators of the Park World Tour and is the organiser of the annual international Silva O-Camp (details here).
Arriving at night on snow-covered roads gave us little indication of what the terrain would be like, but we found the forests and maps to be excellent.  The first morning's training was about 40 minutes away near Vidnava, right beside the campsite used for the Silva O-Camp in the summer. The forest was rather like Mullaghmeen in Co. Westmeath, with a mixture of deciduous and coniferous trees, some roads and some hills. On the first morning we ran a course with small control markers in variable depth snow: the training had been planned for a different area but there was too much snow there so the organisers improvised. That afternoon we ran repeated mass-start sprint legs of about 1 km in the snow in a fantastic old gold-mining area with lots of depressions and contour features and a frozen watermill with sheets of solid ice about 3 metres high.
The second day saw us back at Vidnava for middle distance training (lots of controls and lots of direction changes) with most of us using maps with all paths and tracks removed: the wonders of OCAD! That afternoon, another energy-sapping snowy forest with lots of contour features for short intense loops of perhaps 500 metres and 3 controls. The running was like soft, deep sand. Both afternoon training areas were about 15 minutes jog from the centre.
Saturday was the first day of competition: across the border in the Polish town of Glucholazy, about 15 minutes from base. The event centre was in the "John Paul II" school and the hilly forest nearby was even more like Mullaghmeen than the training areas had been. The courses were disappointingly easy from the navigational viewpoint but pretty physical and the forest itself was lovely: runnable beech and conifers, something like I imagine the JK competitors were running in. Our contribution to the Polish economy was zero as we didn't have any Polish money. It was Easter Saturday and the town was thronged with people of all ages walking around in their Sunday best, carrying little wicker baskets of Easter eggs and going from church to church. Conditions were cold and sunny and perfect for running, so we thought we were made for the weekend.
That evening at the event centre, a night event in the snow failed to tempt any of the Irish to don their O-gear again.
On Sunday morning it was clear that it had been snowing overnight and it continued throughout the day. After extracting the cars, the drive to Vidnava was a white-knuckle ride for drivers and passengers alike, with the team minibus leaving the road on more than one occasion; other cars crashing in the ditch or somersaulting off the road altogether, fortunately without injury.
The snow continued, reducing visibility during the middle distance race, with the runners creating tracks in to all the controls. The 1:5000 scale map with 2.5 metre contours took a bit of getting used to, while sauna-like conditions in the local school hall greeted the finishing runners. Back to base for a welcome lunch (pork with everything) and a rest for the afternoon.
There were runners there from the Czech Republic, Poland, Ireland, Italy, Israel, Austria, Slovakia, Hungary and Norway.
On Sunday evening the organisers announced that there would be a major change for Monday because of the weather: instead of the 10 minute ski-lift trip to start at the top of the forest (where there was more than 50 cm of fresh snow) the courses would be replanned in the lower parts of the forest with mass-starts for each class at 5 minute intervals. As the organisers had the maps on computer and a colour laser printer on site, the new maps (the map was named "Snow Calamity" for the event) could be printed overnight and ready to go for the first mass start at 10 a.m. Unfortunately two of the Irish runners were given the wrong maps for the mass start and didn't discover it until they were well out on the course. The leading runners had to carve elephant tracks through deep snow for the following runners so the amount of map-reading needed was minimal after that - maybe this is how our ancestors followed woolly mammoths in the days before orienteering? 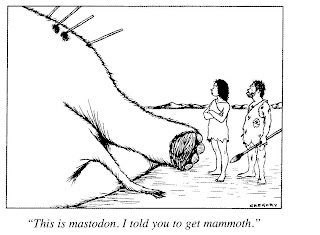 Over the three days the only Irish prizewinner was Cork O's Corbett Brian (or Brian Corbett as he is known here) who took first place in M35.  LVO's Áine McCann was disappointed to drop from 3rd to 4th on the last day due to one route choice in W21A. Colm Moran finished 5th in H21A.
Moving on along more snowy roads brought us to Hradec Kralové which will be the event centre for JWOC and the location of the sprint race. Tuesday morning provided an opportunity to run in part of the relay forest, though not in the actual competition area: a fast, flat forest with lots of vegetation changes and a grid of rides and tracks.
The seven-day tour brought us to new countries, new maps and new terrain and brought the senior juniors and junior seniors closer together as a group: these are the people who could still be running with and against each other for the next forty years or more! All in all, a very worthwhile trip and a new O-country or two notched up.
One personal revelation was how effective waterproof socks are:  I wore them every day running in the snow and they were great! Will they cope as well with Irish bogs?
Read about the Hana O-Festival here.

Championship Time
Remember to enter the Irish Championships on May 4-5-6 (entries close on April 15th) and the Shamrock O-Ringen on June 1-2-3 (entries close on May 10th). Both are selection races for various international teams and should attract top quality fields. Incidentally, Kerry Orienteers are again running a sprint race on the Friday evening of the Shamrock weekend at the wonderful Ross Island near the event centre, Killarney racecourse.
Entries for next weekend's Leinster Championships closed on March 31st. Late news is that LVO's Tyrella event on the sand dunes at Ballykinler, Co. Down, has been rescheduled for Saturday 13th April, the day before the Leinster Championships, also on sand dunes: a good warm-up? Details here, including some specific instructions about access and times.

O-Bits
The Child Protection course planned by IOA for 20th April has been cancelled because there weren't enough people signed up. It's now up to you to find similar courses run by local sports partnerships or others. 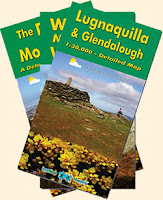 EastWest Mapping have some new maps: they recently published second editions of two maps: 1) Dublin & North Wicklow Mountains and 2) Lugnaquilla & Glendalough. These are now available in standard folded format and they also have a small quantity of unfolded, flat sheets. You can purchase in due course from regular stockists or direct from EastWest Mapping.

Barry Dalby says "There are a number of changes to both sheets, probably more so to the Dublin map. The principal change is to a 10 metre contour interval by popular request. Do note however, that due to the method of contouring, not a lot of extra detail has been added. I've updated quite an amount of other topographic detail and there has been ongoing work in the matter of placenames. These maps are printed on Enduro paper - essentially paper with a plastic substrate, this should give better strength at folds and is practically untearable. There is an extra fold in the maps to reduce size
I hope to have our map of Mount Leinster, Blackstairs and the Barrow Valley at 1:25,000 scale, published by end of April. Finally, I would like to thank you for your support in the past and hope that you will always continue to find something of interest in these maps."
Posted by John McCullough at 23:18 No comments: