Connacht Championships Report
Yet another loaves and fishes event where a small number manage to feed a multitude. The Ryan family and Padraig Higgins staged another Connacht Championships on November 27th, on a new map of open firing-ranges and military land at Oranmore, Co. Galway.
The terrain was fast but provided few technical challenges for the experienced competitors. The map was good (1:10000 scale with 2.5 m contours) and had a much more professional look than the Portumna map used for the 2010 event. Some winning margins were pretty tight (2 seconds in W16) so small errors or route-choice variations could be the difference between winning and losing. Climb was negligible so running the whole course at speed was the only way. The final loop (shared by a large number of courses) traversed an area of long tussocky grass which contrasted with the faster running of most of the map. Old walls and lots of small stony areas shown as cairns, with shell-crater depressions, provided many of the features.
Darren Burke (CorkO) added to his Munster Champs title and won the M21L course, and Ros Hussey (DUO) did the same in W21L. Organisationally, the event was good, with SportIdent timing, results and Routegadget available at teatime (others please copy!) and the opportunity - as with other WEGO events - to enter and pay electronically.
Looking at the courses on Routegadget, there did seem to be a lot of shared legs and some more variation in direction would have provided more interest, and maybe more use could be made of the large depressions rather than just siting a control on the edge at ground level, but I have learned over the years that you criticise a Connacht Championships at your peril!
The area is a bit reminiscent of a nearby one at Kilcolgan used for an IOC Relay (in 1991?) with lots of walls and cairns, but that area was forested which reduced the visibility of the controls and increased the navigational challenge. On this occasion, for me, the controls were too visible and the navigation too easy. It would be a good area for a night event, though.
Results, Routegadget etc here.


Irish Trail-O Championships
LVO staged the Irish Trail-O Championships at Castlewellan on November 26th. Alan Gartside, Stephen Gilmore and Wilbert Hollinger, who would normally be among the top finishers, were involved in the organisation, so it opened the competition up a bit.
There were two classes: one for Irish Champion and one for visitors. John Kewley won the visitors' class with a score of 19 points out of a possible 22, and a decision time of 56 seconds. Interestingly, John was the only one of the 22 competitors to get the first timed control right. Second was GB team-mate Ian Ditchfield also with 19 points but with a decision time of 105 seconds. Christine Roberts was 3rd with 16 points.
In the Irish Championships section, Declan McGrellis again proved his expertise, winning with 18 points and 86.5 seconds from Helen Baxter (18 points, 116 seconds) and Lyle Fleming (16 points, 222 seconds). Details of the event and results (also of previous ITOC's) are here. Planners analysis etc to follow.
It is hoped to run the British Trail-O Championships at Newborough Forest in Anglesey in March, only a stone's throw from Holyhead.
Virtually all the Irish Champs competitors were from LVO so they obviously know about the event. Try finding details of it via the LVO or NIOA websites, though ...

Junior Squad Training for JWOC
Junior World Championships hopefuls had a training weekend at Newcastle, Co. Down on December 3-4 under the watchful eye of coach Greg McCann. The weekend coincided with an LVO competition in Donard Forest on the slopes of the highest mountain in Ulster. Donard, incidemtally, was the location of possibly the first Irish Junior Championships, at a time when the Junior and Senior Champs were separate. That was, I think, in 1977. The map was printed on Tyvek, which was a revolutionary step: it stained easily with mud and blood, but you could read it in the bath (nobody had showers then!).
JWOC 2012 is in Slovakia next summer and age alasses M and W 20 are mainly involved.
There will be further training sessions for the Juniors at the end of January, with the possibility of a spring tour during February mid-term. They will also have a week's training in Scotland after the JK at Easter, and a tour to the Welsh 6-Day in July. Oh to be young again!


Design an O-Top
The Irish Juniors are working on a design of an O-top for international competition. Production of the tops will be subsidised by income earned at JK2011 in Northern Ireland. 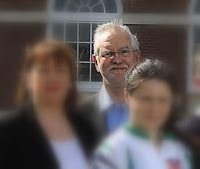 Harold awarded Torch Trophy
LVO's Harold White received a Torch Trophy at the end of November to mark his many years of service to orienteering, culminating in his coordinating the very successful JK2011 last Easter. Harold, wearing his 3ROC hat, is also the IOA Technical Officer.

The Torch Trophy Trust has its origins in the 1948 Olympics held in London. Before every Olympic Games a torch relay is organised from Athens to the host city. Following the 1948 Games, the Torch designed for the last leg of the Relay into Wembley Stadium was presented to the Trust.
The Trust provides small bursaries to assist volunteers in sport and presents Awards to individuals who have been identified as making an outstanding contribution as a volunteer in their chosen sport.
For the Torch Trophy Trust, the flaming torch symbolises its dedication to helping and recognising the efforts of volunteers in sport. Click on the flames on this page to find out more, and apply for one of the limited number of Torch Trophy Trust Bursaries.
The Trust is entirely run by volunteers, and its Trustees are some of the best known names in British sport. Those involved include Mary Peters, Jimmy Hill and Bobby Charlton. See more details here.
Congratulations, Harold! 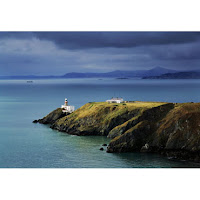 Night-O Starts in Howth
The first night event of the winter is at Howth, Co. Dublin, on Saturday 10th December. Subsequent events in the "Dublin by Night" series are on Saturday January 14th (Phoenix Park), 21st (Ballinascorney), 28th (Carrickgollogan), February 4th (Slade Valley) and 11th (Curragh East). Generally two courses are offered but for insurance reasons they are only open to M/W16 and above. The Howth event will start at the GAA club on Dungriffin Road and there will be two courses, about 3.0 km and 4.5 km. Start times 6 to 7.30 pm. The club bar will be open afterwards for orienteers! Details from Fingal Orienteers here.

O in Venice
Dave Richardson reports from the urban O-event in Venice ...
The 2nd weekend in November brought our 2nd visit to the Venice street orienteering event. As last year the Venice event was preceded by two world Park tour sprints, unfortunately the details of the sprint events were only published a month before so we had already made our travel plans.
This year's trip started with a "Park O" event in Venice S.Elena on Saturday afternoon, this was actually a sprint type event on a 1:5000 map. The weather was great for running, 14 deg C, sunny and no wind.
My men's open course was 4.2K and 18 controls around the streets and alleys of an area at the Eastern end of Venice, it was a nice easy introduction to orienteering in Venice for those new to it. I had been in bed with the 'flu most of the week so was reasonably happy with a time of 30:55, I made one small error missing the alley I was looking for on the first control that cost around 30 seconds but other than that no mistakes.
The main Venice street O was Sunday morning, again aroound 14C and sunny. The first start times were at 0900 so by the time we travelled up the Grand Canal on the water boat we could already see orienteers appearing and disappearing up lanes and passages, maps in hand, dodging tourists.
The organisation of the event is good: a large sports centre acts as event centre and has a large basketball arena where everyone changes. The buzz around the place is fantastic, 4000+ orienteers from all over the world all there for the unique experience of the strret O.
A short walk to the Square used for the start, into the -4 box, clear. -3 Check, -2 control descriptions (Wait a minute -  they are all "end of building"!). -1 box ready to go, beep beep beep and off just like every event except this time it's fast and furious. Which alley way to take? The left hand one, across the bridge, second turn on the right and then next right, just down here - yes got it! Good - now I can settle down. The course was 7k but by the time I had navigated the narrow streets I actually ran 11k. There were some really good legs including my 8-9 that was 1.6k including the problem of which Grand Canal bridge to use.
Quick route choices, fine navigation at speed (not so much of the speed for me!) and keeping map contact are the challenges on this 1:7500 map. Small errors losing 30 secs or a minute can lose you 5 -10 places the times are that tight. I finished in 72:13 in 78th place, without the 5 minutes of errors I made I would have been 55th, but that's orienteering.
Personally I can't wait to go back next year and would recommend it to anyone and everyone. Hopefully next year we won't be the only two entries from Irish O-clubs. Visit the Venice orienteering web site here. See the Men's Elite course here.
[Dave found the Venice experience useful a few days later, running in the Ajax Glendoo Ridge event - remember the area of the IOC Relays in May? "First turf bank on the left, second right, third left ...- Ed]
(Editor's note: travel may be simpler next year with the possibility of specially arranged direct flights from Ireland going out on Saturday morning and back on Sunday evening. Interested? Watch this space!)


Plans for WOC
How will the recently-announced IOF plans for future World Orienteering Championships (WOC) affect Ireland? The WOC has evolved over the years since Ireland first took part in 1976: initially it was just an Individual and Relay with all the team running and the event on every second year; in 1979 it changed to odd years so as not to clash with the Olympics; then the World Cup started on the years between WOCs; then qualification races started so that not everyone got a run in the final; then other disciplines were introduced (sprint and middle-distance) and the WOC was run every year.
What's next?
Read aall about the IOF proposals here. Let us know what you think!

Senior Selectors Wanted
Ivan Millar, Director of High Performance Orienteering with IOA, is appealing for people with an interest in international elite competition to come forward to act as selectors for international teams. Contact Ivan at elites@orienteering.ie