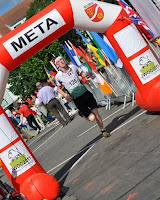 Colm Moran, Conor Short, Cillin Corbett, Jack Millar & Josh O'Sullivan Hourihan are battling it out at the Junior World Championships in Poland. Colm (pictured finishing the Sprint race) is the best of the Irish so far. Watch out for Denmark's Emma Klingenberg (and her sister, Ita) in W20 who have an Irish mother and could run for Ireland ...
Looking at the teams entered, it's clear that JWOC is taken very seriously by the big orienteering countries. The list of past winners reads like a who's who of elite orienteering, and it's great to see IOA putting resources into orienteering at this level as a preparation for future World Championships.
Unfortunately none of the lads qualified for the Middle Distance final (only the top 20 in three very competitive heats go through).
Update: An incredible 3-way tie in the Men's Middle Distance race on Thursday saw Austrian, Russian and Finnish runners taking Gold medals! The top three all had a time of 25 mins 43 secs.

A team of M16's (Harry Millar and Jonathan Quinn - pictured in the Relay start),  M18's (Eoin McCullough, Laurence Quinn and Mark Stephens) and W16's (Clíona McCullough and Niamh Corbett) ran in the European Youth Championships in the Czech Republic at the end of June. The team was led by Greg McCann and Brenda Hynes and the results can be found here.

The team had mixed fortunes, but EYOC is great experience as preparation for big international competition.

Rather belatedly, a brief report on another memorable Shamrock O-Ringen in West Cork on the June Bank Holiday weekend.  Yet again the visitors almost outnumbered the Irish competitors, for whatever reason. Are we scared of the contours? The marshes? The midges? Are we afraid that we'll get terminally lost? Even if we did, to be running around a West Cork marsh with the cuckoos, the myrtle and the fantastic terrain is a wonderful way to spend a weekend.
Word of the Shamrock is leaking out, though - people from all around Europe come back again and again to savour the atmosphere and terrain. One runner put it in the same category as Finland's Jukola overnight relay - it's simply a unique event.
Kilcrohane provided the focus, with a middle distance race on Saturday, a classic distance on Sunday and a chasing start on Monday (where the winner is the first to cross the line). Darren Burke took the M21 Elite title, only seconds ahead of ken Peeters (Belgium) - see the photo. Cath Chalmers from Australia won the W21 Elite race. Overall results are here.
Next year's Three Day is in the Oughterard area of Co. Galway, run by WEGO, on the first weekend in June.

A number of Irish competitors are at the World Masters Orienteering Championships at Pecs in Hungary. The forested karst limestone terrain is different to anything we have here, so it will be a new challenge. Read about the events here.
The lady on the left is Sarolta Monspart, 1972 World Champion from Hungary. She was the first non-Scandinavian World O-Champion, seen here at the opening ceremony for WMOC 2011.


Setanta Rogaine
Boggy underfoot conditions and very warm weather did not deter the competitors at the 2011 Setanta Orienteers Rogaine on June 25th/26th in Co. Wicklow.  The championship event, 24 Hour Team, was won by Nicholas Mulder & Ryno Griesel (Rand OC, South Africa) who managed to collect all controls within the 24 hours. This is a great achievement in the bog and heather of Wicklow, something the pair wouldn't be used to. The conditions were very wet under foot after a lot of rain the day and the night before the event. They may have been more used to the heat wave that we suddenly got over the weekend though, with temperatures of 23C during the day. It was a warm, clear, calm night for those who spent the night out on the hills. The 6 Hour Team event was won by Ruth Lynam & Don Short (CNOC). This was a great win for them in their first 6 hour Rogaine after competiting in many previous 24 hour Rogaines. Paul Mahon took the honours in the new addition to the Rogaine events, the 6 Hour Individual. Jukola Relay
There was a small Irish presence at the Jukola 7-person overnight relay in Finland on June 18/19. A CNOC team of Conor and Ruairi Short, Shea, Kevin and Niamh O'Boyle, Hugh Cashell and Colm Hill finished in a highly respectable 296th (not 765th as I said earlier!) place among the 1500 teams to start. Bishopstown's Nick Simonin, running for his Stockholm club Lidingo IFK, came in an amazing 23rd place on leg 1 (which started at 10.55 pm), only about 90 seconds down on the leaders. John and Eoin McCullough and Ronan Cleary ran on a London OK team and Nina Heikkinen (Philips) and Julie Cleary ran in the Venla 4-person Women's relay earlier in the day.
The Jukola is an amazing event: about 15,000 runners between the two races. There are orienteers in Finland whose only event of the year is the Jukola.
Next year's race is only 10 km from Helsinki Airport ...


Here, Eoin McCullough reports on his first Jukola relay:
My first experience of the Jukola relay in Finland is one I will never forget. Myself, my dad and two friends arrived in a muddy car parking field with a hint of rain in the air on Saturday afternoon. We found our army tent, which would be our accommodation for the night, and then went to check out the arena. For those of you who haven't been to Jukola before, the arena is like a small town, with everything you could possibly need at an orienteering event, or anywhere else, for that matter.
After an hour or so, we began to move towards the start of the Venla relay, the womens' relay. At 10 minutes past 2, over 1400 women streamed up the hill from the start and into the forest. The Venla relay turned out to be closely fought by Domnarvets GoIF of Sweden and Tampereen Pyrinto of Finland, with the Finnish team missing the second last control, where Domnarvets passed them and won the Venla by only 35 seconds.
A few hours later as darkness was beginning to descend, the slope above the starting pen became crowded with people, eagerly awaiting the start of the Jukola. As it got closer and closer to the start time, there was an electricity in the air as the runners turned on their headlights, a mass of lights bobbing up and down in the Finnish countryside. Then, at 10:55, an artillery gun signalled the start of the greatest relay in the world. Suddenly, the bobbing headlights were streaming out of the start and up the hill, with an Irishman getting to the top first, Nick Simonin.
After the start, everyone began to move to the finish arena where there was a huge screen with live images from the forest with live splits. It was thrilling to see 1500 headlights worming their way through the forest. The atmosphere in the arena was great, with everyone there looking out for their team to come through the next radio control. I went to bed after only 30 minutes of the mens' race, because I still had to run the next morning on leg 6 for my team.
As I was asleep, Halden SK won the Jukola by over 4 minutes to make it two Jukola wins in two years. Meanwhile, there was fierce competition for second place with Kalevan Rasti getting the better of Delta and Vaajakosken Tera for second place, with Delta finishing in third.
When I woke up to prepare for my race, the leading teams had long finished. I was in a mass start with over 1000 others. I myself had a good run and really enjoyed the runnable, technical forest and was in the top third of runners on my leg. I really enjoyed the run and was very happy it.
After my run we did some shopping, ate, and enjoyed the sun that had been shining since the early morning, making lovely running conditions, drying the ground and making it feel like summer again.
Later that day, most of my team stayed with friends who lived an hour away, near the Russian border. There we had a sauna, a swim in the lake, a good meal, and a well-deserved night's sleep in beds.
The next day we flew back from Helsinki to Dublin, ending an unforgettable few days. I really enjoyed everything about the Jukola, the running, the spectating, and especially, the incredible atmosphere of the Jukola. It was a great experience for me and all I want to do is do it all again next year.....

Scottish 6-Day Good luck to everyone going to the Scottish 6-Day at Oban at the end of July. This is a real taste of big-time international multi-day orienteering, with more than 3000 runners from all around the world. Entries are still open, by the way: see here.

World Championships Of course the big event this summer is the World Orienteering Championships near Chambéry in France in mid-August. Will Thierry Gueorgiou be disqualified or fail to finish again? The Irish team have been preparing in France and Scandinavia and are ready to go: read their blog here. The Junior Squad are taking in the associated "O-Festival ERDF" as their summer tour. Details of this event, with more than 3000 runners, are here.
Meet the Irish Team, David Healy, Marcus Pinker, Seamus O'Boyle, Darren Burke, Nick Simonin, Ruairí Short, Niamh O'Boyle, Aislinn Austin, Ros Hussey and team leader Kyle Herron,  here


Finally, have a great summer of orienteering - and please write about it for TIO when you're there or when you come home!
John McC .

PS Here are some more photos from EYOC and JWOC.
Posted by John McCullough at 23:28 No comments: