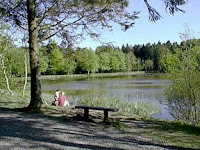 When the stress of exams comes around, you know the CNOC summer series isn't going to be to far behind to help transform the stress of the mind to the burning of the legs. The first event this year was in Donadea Forest Park in North Kildare. Eileen Loughman took the lead in planning the course, and the Shorts highly involved in org as usual. Conor took control of the SI, with Don head sausage cook after being relieved of gate duty.

Three courses were on offer, the long at 5.7km and medium at 3.6km. The short course was a quick jaunt around the lake.The faithful began to arrive and vanish into the forest, as the car park filled. The beautiful evening was even tempting out a few of the locals.

On Long the fastest times were Christian Foley Fisher 42:05 and Kevin O Boyle in 42:34, only for the party to be spoiled by Marcus finishing in a time of 40:32. On Medium, Chris Blau ran it home in 35:33 closely followed by the young Sanni Kymalainen of Setanta only 12 seconds back, Brian Hill finished off the top 3 almost 5 mins off Chris. Caoimhe O Boyle contuined her winning form coursing to victory on the Short with Ciana Jones 4 mins back. Nora Casey was 29 mins with six runners clocking in at 32 mins.

Jukola Training in Donadea you say? A commotion at the start saw Seamus O'Boyle, Ruairí Short and Colm Hill take off in a mini mass-start at breakneck speed. People stood back as they accelerated across the car park - what no one saw was the Seamus running to the left, Ruairí and Colm following, Shea stopping and saying, right guys so where are we? The curses and abuse were let out before Ruairí relocated and set the pace. About 30 mins later they re-enter the car park, Colm reaching the map exchange seconds before Seamus, both pick up a medium map and are off again, a few minutes pass and Ruairí enters the map exchange and leaves without breaking step. After completing the Medium course, Seamus cruises in 1:01m clear of Colm - with Ruairí running strongly by himself to finish 5 mins off the pace. (Shea - 9.3km, 32 controls in 55:31!)

The sausages are eaten, the tea is drunk. . . only one thing remains. The car park begins to clear as the sun slowly falls. With tired legs, Ruth, Eileen and anyone else lucky enough to still be around set out to collect the controls at the far reaching parts of the map . . An enjoyable afternoon, and the perfect excuse not to do a bit of study.

Colm Hill
Posted by John McCullough at 23:28 No comments:

Monster at the IOA AGM 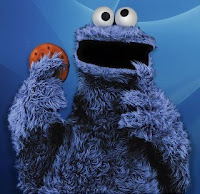 "Frankly, it's a monster". It's not what you expect to hear in Ruth Lynam's sophisticated tones, but this was a good monster.
The juniors have become monstrous .... Ruth and her willing band have become so successful that demand has exceeded supply and she is sending out the call for reinforcements.

It came in a brief pause in the proceedings of an IOA Annual General Meeting being driven on by the Chairman, who has brought a new discipline to the proceedings: sprint AGM.
Tero Mamia's lessons came in handy. Pick only the bits you need to know and read ahead.

At the start the minutes of the 2007 AGM were dispatched in a flash, Officers' reports were loaded into the breech and fired into the crowd, Gatling gun fashion.
Chairman's report, treasurer's: no sooner had you scanned the one page handout than a new officer was standing up.
Printouts were forsaken for web page references; Fergal Reid just gave it to us straight, picking out the key points we needed to know.. publicity some clubs have generated, the difficulty of getting consistent coverage.
Lastly it came to Feargal Buckley(KerryO), fixtures...this could be tricky, but no, Feargal kept it sweet and told us things were good and get the fixtures in.

Next it was motions.
New Treasurer Mary O'Connell (3ROC), put the knife in early and with an eye to expediency wrested our paws gently from the affiliation purse strings, we'll never notice.
Ed Niland was renamed the Coach.
Awards were changed, and we were into the home straight ... election of officers.

Sensing he was going to break 7 min/km the chairman cracked on.
Treasurer, Juniors, High Performance ... nominator, seconder... we rattled through the election of officers.
The nodding heads just threw up their paws when they heard "For the motion" , knowing it would hasten their release from this event, into the bar.

So frenetic was the pace that he himself got out of synch with his script.

"Chairman [pause] .. I am the Chairman , [long pause]", .. had he gone Mugabe? Was he going to dispense with the nominator, seconder formality.. he probably would have got away with it.

It was a momentary lapse...the Zanu-PF threat receded and we were off again.

Awards, the names of Mary Healy (GEN), Brian Power (SET) and Andrew Cox (WATO), were gladly added to those that keep the orienteering train going.

And that was it.

Interspersed in the proceedings, schools orienteering, juniors, featured strong in the discussions, a sense prevailed that things were moving nicely and could be built on.
Add to that, significantly, for the first time in many years, a Development Officer was elected and the post-AGM talk was of the promise of a Secretary.

The Chairman can probably reckon that persistence is bringing returns. Sprint AGM may be here to stay.

Peter Kernan
Posted by John McCullough at 22:00 No comments:

Cork Orienteers put yet another nail in the coffin of orienteering as "the forest sport" with an excellent three days of events on a treeless Bere Island at this year's Irish Championships in west Cork. Looking back at past Irish Championships, open areas or predominantly open areas have been used for Irish Championships since the mid 1980's and Bere Island was another good example. Moderately complex contour detail, few tracks, lots of crags and marshes and spectacular cliff scenery were some of the memorable features of the weekend.
In Saturday's classic distance race, Marcus Pinker (CorkO) retained his Irish M21 Elite title while Niamh O'Boyle regained her crown in W21 Elite. See the classic distance results here.
In a departure from the expected plan the organisers opted to stage the Relays on the second day, Sunday, ensuring a good turnout of teams. This, combined with the reduction and simplification of relay classes, made for more competition on the day. Dublin's Great Eastern Navigators took their first ever Open title with David Healy, Tero Mamia and Ondrej Pijak, with the closest finish of the day, relegating Cork O to second, 39 seconds adrift, and CNOC third. Cork O (Ailbhe Creedon, Faye Pinker and Fionne Austin) took the women's trophy with the Lithuanian Medeina team second 3ROC third. See the relay results here.
In Monday's Middle Distance race on the west end of the island, Ondrej Pijak won the Elite course with Marcus Pinker second and Nick Simonin (BOC) third. In the W21E race Niamh O'Boyle again took gold with Ailbhe Creedon (Cork) 2nd and Ruth Lynam (CNOC) third. See the middle distance results here.
The Irish Championships on an open mountain area in May can be risky from the perspective of the weather but, with the exception of some heavy showers on Saturday, the competitors escaped largely unscathed. The classic race used the centre part of the A3 map, the relay and the middle distance races used A4 maps to the east and west of the main competition area. The relay, in particular, had a spectacular start location, with views all over the island for those who chose to look. Brian Corbett's revised maps were printed on waterproof paper rather than using plastic bags, and the innovation worked very well.
Cork O pulled out all the stops to provide a very well organised event; the evenings featured technical sessions in Castletownbere, the IOA Annual General Meeting, and screenings of Finn van Gelderen's new movie on orienteering.

Runners routes for the classic event are on Routegadget here.

Incidentally, another memorable feature of the Irish Championships can be hearing the first cuckoo of the year: last year it was on the course, in Co. Fermanagh; this year it was at the site of the Kilmichael ambush in Co. Cork on the way home - thinking we were going to Béal na mBláth.
Posted by John McCullough at 22:41 No comments:

While many of you will know Julie Cleary as an Irish international orienteer, many of you may not know that just days after the 2006 Irish Championships at Carlingford, Julie suffered a brain haemorrhage and stroke.
Julie has been orienteering since she was a junior with Tipperary Orienteers, the club founded by her father, Frank Martindale. She was an Irish Junior Champion and went on to represent Ireland at World Championships and World Cups on several occasions, as well as being Secretary of IOA, and an IOF event advisor.
She is now looking for sponsorship for "Different Strokes", a charity which helps young stroke survivors in Britain and Ireland: she wants orienteers to sponsor her for each km she runs in orienteering races during May- June, up to a maximum of 50 km.
Julie logged some more runs at the Irish Champs at Bere Island, and you can get more details of her plans and how to sponsor her on-line here.
Posted by John McCullough at 23:08 No comments: