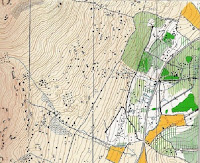 Yet again a small group of dedicated volunteers put on a good weekend's orienteering against the odds. This time, Andrew Cox and his crew at Waterford Orienteers staged the 2011 Munster Championships amid the elephant and whale-sized (and bigger) boulders of Coumshingaun in the Comeragh Mountains and followed that with a relay in the John F. Kennedy Forest Park in Co. Wexford the next day.

Conditions for Coumshingaun were far from ideal - rain, mist and wind - but that didn't seem to deter winners like Darren Burke (CorkO) in M21 and Ros Hussey (DUO) in W21. Disintegrating bags, dissolving ink and mushy maps may have affected the slower runners more, and the intervention of a local farmer who didn't like the location of one of the controls marred the competition for some, but by and large the runners seemed to have enjoyed the challenge.
Pat O'Connor kept the courses in the open for all except the very first and very last part, with the more technical courses climbing towards the corry lake and its detailed contours and erratic rock features (imagine that at 1:5000 scale or larger!) and for a large part of the courses the runners luckily had the wind and rain at their backs.
Results of the Championships are here.

Monday's relays at JFK were a more casual affair, with teams made up from multiple clubs in a range of age classes. Again, rain provided refreshment and showers at the same time, and the on site café (on its last day of the season) provided hot chocolate and shelter for the prizegiving.
The open men's class was won by the Irish Junior Squad (Cillín Corbett and brothers Jonny and Laurence Quinn) with only seconds to spare over the more seasoned Aonghus OCléirigh, Brian Corbett and Colm Hill. Fingal (Eileen Young, Kathryn Walley and Jean O'Neill) were the only team in the Women's Open class. Results (containing some anomalies due to SportIdent issues) are here.


Connacht Championships
Another small group staging a Championships are Western Eagles - Galway Orienteers who are running the Connacht Championships at the end of this month, on Sunday 27th November.  The event is on flat, open terrain at Oranmore, Co. Galway. The cheapest entry date has just passed, but entries don't close until 18th November. You can enter by post or by e-mailing the entry form and paying the fees electronically to the WEGO account - details are on the entry form.
Entry form and full details of the event are here.


Irish Trail Orienteering Championships
LVO are staging the Irish Trail-O Championships the day before the Connacht Champs, at Hillsborough Forest in Co. Down, on Saturday, November 26th. Hillsborough was mapped for one of the JK Trail-O events last Easter. Start times from 11.00 to 1.00 pm.
What is Trail-O anyway? It started out as orienteering for the likes of wheelchair users who had to stay on paths but who still wanted a navigational challenge. Anybody can take part and most of the "legs" (if you can call them that) involve choosing which control, of maybe 4 or 5 visible ones, is the one shown on your map. Typically two "legs" are timed as a tie-breaker: the fastest at making the correct choice. No timing is involved on the other legs, where the competitor travels along a path and looks at controls in the terrain (sometimes wuite a distance away). Sounds easy, doesn't it? Don't be misled: the controls may only be a metre apart, and none of them might be in the right place ...
It's a tough mental and navigational workout and planners Wilbert Hollinger and Stephen Gilmore (not Alan Gartside as I had previously thought) will have you begging for mercy at the end. Give it a try! Get all the information you need on Trail-O at www.trailo.org here.

The website for the Irish TrailO Champs at Hillsborough on Saturday 26th November is now available at www.niorienteering.org.uk/trailo.  Come along and test your decision-making skills against Stephen Gilmore's and Wilbert Hollinger's best efforts to distract you.  You can get a taste of Wilbert's planning techniques by undertaking the Pre-O at the LVO Autumn Trophy event in Kilbroney Park on 19th November; the differences between Pre-O and championship Trail-O will be outlined in the debrief.
Alan Gartside

Get ready for winter
Checking you have antifreeze in your car, Yak-Trax for your feet and fuel for your fire are only some of the things you need to do. Orienteers are checking their batteries and sorting out their kit for the start of the night orienteering season.
Lagan Valley Orienteers' Wednesday evening night-O training series starts on November 9th at Ormeau Park in Belfast with a mass start at 7.30 pm. Though aimed primarily at LVO members, they probably wouldn't mind a few interlopers ...
Meanwhile, the annual "Dublin by Night" series starts with Fingal's Howth event on Saturday, December 10th. More about this closer to the time.


Junior Orienteering
Greg McCann (LVO) is stepping down from his coaching position with NIOA after many years encouraging juniors from all over Ireland in the Junior Squad. Greg's IOA counterpart, Ruth Lynam, will also be stepping down after her stint as IOA Junior Affairs Officer at the next IOA AGM. They will both be hard acts to follow. Simon Reeve (FermO) is one of the upcoming coaches in NIOA and he will be working with the Juniors, while NWOC's Allan Bogle will also be taking up a position with NIOA involving coaching development. Allan has been involved for several years in running orienteering training in the Canary Islands, so who knows: a junior training camp there next year, maybe?

The Junior Squad were put through their paces at Glengarra, on the slopes of the Galtee Mountains in Co. Tipperary, in a training day before the recent Munster Chmpionships. Several new faces were notable, particularly with a new wave of girls coming into the squad - that's great to see. Ruth and the other coaches ran training exercises in the forest and on the open mountain, prepared by Brian Corbett, before retiring for chicken curry at the Rathgormack hiking centre.

Plans are afoot for a Junior tour next summer, with families voting on the alternatives of the Welsh 6-Day, Swedish O-Ringen, the OO Cup in Slovenia and the World Championships tour in Switzerland. There may also be a training weekend for JWOC hopefuls before Christmas, and further training at February mid-term and again before March.

The annual street event in Venice is on next weekend. Read about it here. Irish orienteers have made the trip before - are you going this year? Will you write and tell us about it?
Over 4300 are entered for the event this year. Just because it's urban doesn't make it a sprint: the longest course is Men's Elite at 11.1 km, so the running distance will be about 16 km or more. Entry is still open, by the way, at only €15 for late entries. Details here. There's also a Park-O event the day before. 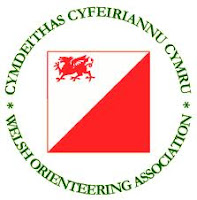 Few surprises for Ireland in the Senior Home International in south Wales at the beginning of November. Details on the Senior Squad blog here. A cold and windy day on the open mountain for the Individual event saw two of our Swedish-based runners produce the best results: Conor Short 4th M20 and Hugh Cashell 8th M21. Scotland held England to a draw in the individual event with 24 points apiece, but ran ahead in the relays to win by 54 to 46. Wales were comfortably ahead of Ireland on both days, with Ireland only scoring in single figures. Nevertheless, it was a very useful outing for some of our up-and-coming orienteers, running under serious pressure and getting more international experience which will stand to them at Junior World Championships and the like in the future. The final result was Scotland 54 England 46 Wales 28 Ireland 16. See some photos of the event here.


Newstime
If you have any news, please e-mail theirishorienteer@gmail.com
Posted by John McCullough at 18:02 No comments: