The 7th European Youth Championships (EYOC) were held in last weekend. EYOC is becoming a popular and prestigious competition for European 16’s and 18’s, 29 countries attended this year with a total of 370 competitors. Ruth Lynam reports ...

The Irish team members were M18’s Niall Ewen, , Padraig Mulry, Kevin O’Boyle, and M16’s Seán Knight, Colm Moran & Conor Short. For Padraig & the M16’s this was their first International selection event. They were led by Ruth Lynam & Darren Burke.The 450 or so attendance - runners & leaders, were organised with (mostly) exemplary Swiss efficiency. The food was good & plentiful. The afternoons were sunny but early morning fog kept the temperature down & the running conditions were excellent. The rising mists, autumnal forests, & white crags of the made a beautiful backdrop for those who had time to look.

On Thursday the team arrived in time to do the model event in delightfully runnable mature forest with very good visibility & lots of paths. The terrain for the Long & Relay on Friday & Saturday was similar, but decidedly more overgrown though still passable. The Long required a mix of skills, using contour detail & vegetation as well as untangling the paths. Kevin O’Boyle in M18 had the best Irish run coming in 59th out of 106 runners, and the M16s on the whole ran steady races, Conor coming in fastest, 67th of 96.

The Relay area was similar but flatter, good fast relay terrain. Sean ran a good first leg to set the M16 team up for 19th place, ahead of the Danes, among others. Niall on the last leg had the best run of the M18s.

There was some Irish interest among the higher placings. Emma Klingenberg, whose mother is from Northern Ireland, had a convincing win in the Long, & anchored the Danish W16s home first in the Relay, and Severi Kymäläinen’s Finnish team were 5th in M18 relay.

The Sprint on Sunday was in Solothurn. Darren & I were not allowed visit the competition zone in the reportedly beautiful baroque city, & the juniors brought back no descriptions, but we did see the dramatic Finish area. The run-in followed what must have been a wide moat below high city walls, & the race featured a dramatic run-past along the ramparts overlooking the Finish area. Kevin put in a very good run here to take 39th place, just 1min 40sec down on M18 winner Kristian Jones of Great Britain.

Sprint & Relay are not Irish strong points as there are so few opportunities to practice, so this was a terrific performance by Kevin. All the Irish juniors put in real effort & showed great enthusiasm, & on the whole ran good controlled races keeping any errors small. With experience they can improve at Relay & Sprint, and learn to race assertively on strange terrain.

Results in brief below. Full results are on the EYOC website http://www.eyoc2008.ch/dyn/eyoc/results/

or better but in German at

(PS The title of this report was chosen by JMcC, not Ruth, and is not an endorsement for Arret, Imodium or any other such product!)

Posted by John McCullough at 18:24 No comments: 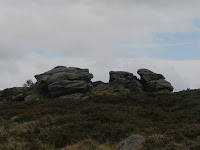 It’s time for some technical training.
David Healy is running four technical training sessions on Wednesday evenings at Three Rock Wood, starting on 22nd October. Anyone who is a reasonably competent orienteer can come and will benefit: once the clocks go back next Sunday (26th) it should be good training for Night-O. Note **The later sessions have moved to Saturday mornings**

This training is free of charge. It is going to be provided by myself to get an idea of who in wants to train their skills and how often they’d be interested in training. If there is a good turnout I think there could be some more training arranged in the future, Saturday mornings would be a better time. Or is it? It depends on who comes out to this experiment and voices their opinion on what training they’d wish to receive. If you cannot make the Wednesday trainings but are very interested, please show the interest by getting in contact with me through email.
Please note that this is not an introduction to orienteering, beginners will not be catered for. It is for intermediates and advanced. However I would encourage beginners to come along anyway and I could explain some stuff to you. Since the training is free you might as well give it a shot. Please email me if you are at a beginner level so I can be prepared.
I’d like to thank 3ROC for the use of their map for this training experiment. Hopefully I’ll see some enthusiastic orienteers on Wednesday. Get out to the first one as the light is fading very quickly!!

Posted by John McCullough at 18:00 No comments: