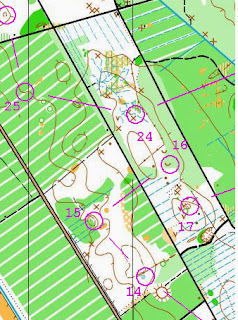 It's unusual these days to get to run in a forest on two successive Sundays, with so many events taking place on open mountain, but both Championships provided good orienteering in good forests. The Connacht Championships, run by Galway's Western Eagles club at Newcastle Demesne near Ballymahon in Co. Longford, offered an interesting mix of coniferous and beautiful runnable beech wood, with an elegant setting in front of Newcastle House, the seat of the King-Harman family since the 1700's, on the banks of the river Inny. Heavy rain early in the day tested the waterproof maps to the limit, while Frank Ryan's courses used the best parts of the wood, though anyone taking the longer road routes got to know one or two sections of road intimately. 3ROC's Colm Moran took the M21Elite course while CNOC's Niamh O'Boyle won the W21 Elite. The event was run largely for the benefit of visiting orienteers as the small number of Connacht runners were mainly involved in helping: there was, however, one Connacht prizewinner in Derek Conerney, 2nd in M40L. Once again, hats off to the small group of orienteers in Connacht who ran the event: in all honesty I have to say it was much better than I had expected! You can see the results, routes and split times here.

The following Sunday, Cork Orienteers ran the Munster Championships in a classic Galtees forest at Toureen Wood near Cahir. Galtees forests tend to have large erosion gullies running down the sides of the mountains and forests roads running parallel to one another across the slope, and Toureen Wood is no exception. Starting high and finishing low may have reduced the climb on the courses but it didn't eliminate it altogether. The turnout was better than for Connacht, with a good representation of Munster and Leinster runners and a handful from Connacht and Ulster, not to mention a couple of Swedish visitors. Cork O's Darren Burke retained the Munster title, his fifth, while his clubmate W18 Niamh Corbett continued to make her mark and took the W21 title. Yet another good day's orienteering in quite detailed forests where, again, the planners (Liam O'Brian and Willie Fitzgerald) made the best use of the area. You can see the results, routes and split times here.

Wherefore Art Thou?
For those unfortunates who weren't able to make the Munster Championships, there was some consolation in the Three Days of Rome the same weekend.  About 20 orienteers from Ireland made the trip, and you can read Niamh O'Boyle's account of the races here:


With the World Championships to be held in Venice in 2014, meaning an embargo over parts of the city, the Italians took the opportunity to offer a 3-day event in Rome instead. It attracted 18 orienteers from Ireland out of a total of 974 from 17 countries. Our group of myself, Kieran Rocks, Susan Lambe, Marcus Pinker and Ger Butler had a great apartment just down the street from the Colosseum.

Day 1 was held in a fairly straightforward park, made much more interesting and fun by running the event as a mass start night-O! Villa Borghese is one of the most popular parks in Rome just north of the city centre. Fast and furious, you had to run fast or get left behind. Wilbert Hollinger kept his cool to finish first by 5 seconds in M65. Mary O'Connell of 3ROC took 2nd place in W50 and Aoife McCavana of GEN was 3rd in W18. My map with route from the women's elite course is here.

Day 2 in Villa Ada was a totally different proposition - green and hilly with lots of route choice (through the green or around on paths?). It was hard to follow the little paths in places and many people lost time wandering around, including me on no. 10. Wilbert was 1st again, Mary was 2nd again, and Marcus Pinker took 3rd place in M35. Again, my course/route is here.

Day 3: the main event. This was the one that we had been waiting for; a chance to run around ancient Rome, past the Colosseum, on the same streets that the Emperors once ruled over. The race didn't disappoint and required forward planning and nifty footwork to avoid tourists and garbage trucks in the narrow streets. There was also a challenging crossing of a major road - the option being to throw yourself in front of the cars and hope they stopped on time to save time or politely wait until they had passed. Marcus was the only one in the top 3 today, with a fine 2nd place in M35. Most of the W21 course is here (no A3 scanner - hence no. 1 is missing).
The Irish put up a good show overall with Marcus sneaking up to 2nd on M35, 19 sec ahead of 3rd after 112 mins of running! Wilbert took 1st place on M65 despite dropping time on the third day, and IOA chairperson Mary was consistent enough to finish 2nd. I'm not sure if they will run this event again or if it will revert to Venice, but it's definitely a nice choice for a weekend of orienteering in November (25 degrees and sunny :)

Calling all Controllers
IOA is running a one-day Controllers' Course in Kildare on 16th November, given by the doyen of UK controllers, Graham Nilsson. Graham has given controlling and planning courses here before and they are excellent. However, it is limited to 15 people and by the time most of you see this it will probably be over ... (but look for a dramatic improvement in course and event standards?)

O-Bits ... EYOC Photos taken by Gerry Meehan at October's European Youth O-Championships in Portugal are here ... IOA are running a two-day First Aid course in Newbridge on 30th November/1st December. At present there are only 2 places left. Details here ... There is to be a sprint event at Dublin City University on Saturday 7th December to raise money for the Junior Squad. There were four great sprint events last year for the same purpose, so here's a chance to do some sprint-O training in preparation for the Irish Sprint Championships at Maynooth at the beginning of May ... JK2014: entries are now open for Britain's biggest O-event, at Easter (April 18-21) in South Wales. See here ... Sad news: the death occurred on November 5th of Nuala Rothery, wife of Seán Rothery, one of the founders of Irish orienteering, and mother of former Irish Champions Eoin and Colm.

Posted by John McCullough at 21:32 No comments: