Colm Hill reports on his teams great result in the Jukola Relay at Mikkeli in Finland earlier this month ...

On June 13-14th a number of orienteers took part in the Jukola relay at Mikelli in eastern . The Jukola Relay is a seven-person relay event that starts at . The relay kicks off with an artillery cannon. Upon the explosion, the hoards of runners numbering 1500 pour out of the stadium to the cheering of the gathered crowd. The first 3 legs are usually held in darkness but by the sun has risen above the Finnish forests. The next two legs are shorter with the final two legs gaining length. The last leg is usually the longest and most challenging – its purpose is to split up the anchor legs of the strongest teams battling for the win, or - as the case may be - battling it out with a small rival club to jump into the top 300 finishers. 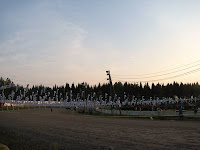 David Healy (GEN) ran the first leg for the ad hoc team of Ticknocturnals (TNT) IOC. With the start number of 573 he was somewhere among the middle of bodies running out along the horse track. On the big screen in the middle of the assembly, the first leg was shown, well, part of it. It’s kinda difficult to fit a 4.1km leg onto a screen regardless of size. We were hoping that Dave would maintain his 573rd position. After min. Finnish club Kalevan Rasti were the first team to reach the first control. Soon the 15 ft screen was full of runners swamping around the control. At the base of the screen the names of teams began to pop up and scroll off as more and more teams registered. 191st TNT +2.31mins. Dave managed to gain 382 places by the first control. A faint cheer could be heard amongst the massing crowd. That was a job done as far as we were concerned. Time for more important things for the rest of the team,while Niall Ewen (CNOC) began to warm up: mainly food and sleep.

David comes in, Niall goes out. I didn’t notice it. I was away in my own world getting wired for the test that was about to come upon me. Meanwhile out in the forest Niall was beasting around the 2nd leg. The darkest part of the night. Totalling 12.7km- if you’re running in straight lines. He lost his way once or twice in the thick forest but finished strongly. At the map exchange I didn’t see him coming. I heard him. Screaming out my name as if his life depended on it. I yelled at him. He flung himself at the barrier and we yelled at each other for what seemed like 5 mins. Have a good run? F*** YEAH. CNOC the sh*t out of ‘em. “CNOC…” as I ran away from the barrier as high as a kite “…Not Sh*t!” were the last words I heard. He might have said it or it might have been my own voice in my own head. Who knows?

I had the third leg, which is known as the “Long Night”. As the Jukola event was held further north than usual the sun rose mid way through the leg so it wasn’t as tough as other years. I was pushing the pace as much as I could but made 3 costly errors. I forced myself to keep running hard. I had a few close calls. Coming up to the end. About 2 km to go. Nothing mattered anymore. Conor Short was less than 2 km away. The 3rd last leg. Green marsh with a river in the middle or track around? There was only one option. Battling through the green I knew I had made a good call. Then I saw the river, or swamp or orienteers grave. On the far bank I could see foot prints and fingers marks clawed into the bank… oh no! I backed up and ran at the river. I jumped. Flying through the air. I made it. Well, my left foot did. My right foot ended up in as far as my hip. I struggled out. As I ran in the 4th leg runner for was running in. 5 mins clear of 2nd place. I had left Conor with a lot of work to do. I pushed the pace along the run in, wanting to catch as many runners as possible. That run in just kept on going. Finally reaching the map stands I began to yell at Conor, not sure if he was even there. When I finally looked up, it turned out that a space had formed around Conor. Perfect. I attempted to open his map for him but failed. It didn’t appear to bother him as he grabbed it and legged it out into the forest. The next hour is a bit hazy. I think I spoke to Niall and congratulated him on his run. Headed to the showers. More coffee. Woke up Niamh O’Boyle and Colm Moran. 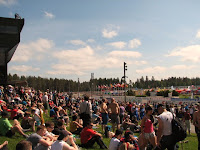 Away from the assembly area Conor was battling it out in the forest. As he ran he was picking up places left right and centre. He had gained 7 places in the bag by the 2nd control. By control 9 he had gained 10 places. As he left the main gaffle on his course he had dropped back places but hung on all the way home to gain another 2 places for TNT.

Friday morning, the day before the race, we had been laughing and joking about where we’d finish and what was the best case scenario. After last year when Seamus O’Boyle, Ruairi Short and I managed to bring the Defence Forces team into 304th we assumed that if we finished in the top 400, it would be a good result. After pondering about our estimated times we figure we might just miss the mini (massive!) mass start at the end.

As Conor hammered the run in, he found Niamh and she set off. We knew she’d be consistent, this never came into question - our worry was could she match the pace of her male counterparts in technical terrain. Or perhaps that last bit should be revised. Could she get through the manky terrain as fast as the taller Finnish runners. Luckily for us, the slow going terrain suited us better as we are not blessed with beautiful 4 min/km runnable forest. Niamh bounced around the forest. During the middle of the course she dropped a few places but then looking at the splits she must have been splashed or something as she begins to pick up places in the 2nd half of the course. For those that don’t know, she’s not the best morning person. So being woken up at 5am and being told you have 10km to do was never going to go down well no matter how we phrased it! 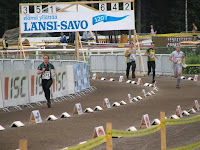 Niamh came in and unleashed Colm Moran (3ROC). He set out on the longest course he has run to date. As he began to battle it out in the forest, porridge and coffee called for the rest of the team. After the food was scoffed the anxious wait for Colm continued. Time passed and he registered at the last radio control. Seeing a red o- top on the run in and Colm beasting it in, Niall and myself legged it outside and began to scream hell’s abuse down the run in at him. As Colm got closer, we realised it wasn’t Colm but some other random club. These things happen! Colm eventually descended upon the run in. He was really suffering. You can see it in his stride. His run -or stagger- brings back memories of being on the receiving end of 2 hour suffer runs up in the mountains during the winter. We do the only thing we can for him…. Yell louder!

Colm in and Kieran Rocks (LVO) out. Or what it looked like to us was that Colm was out for the count. He walked out of the download. A big smile on his face. He claims he was fine but the blank “I’m about to pass out” look in his eyes only sent Niall and me into a fit of laughter. With everyone done and dusted it was down to Kieran to bring us glory. Daniel Hubmann came in to take the title, so I was slightly disappointed we didn’t win it. He was followed by Thierry Gueorgiou. And eventually Emil Wingsted. We were knocked out of the top 3. Damn! Next year will be different. The run in became a ground for the tired last leg runners to battle it out for club glory. Every place hotly contested. Not one orienteering wanting to give an inch.

Time passed and no sign of Kieran. After a respectable min he crossed the line. He later recounts his run as being one of those where what can go wrong, doesn’t just go wrong. It goes wrong and gets worse! From losing a contact lens to dropping the power gel. Navigating in is tough – attempting the nav with one eye is something I wouldn’t be very fond of!

CNOC’s Ruairi Short was also running at the Jukola event, he was running for his Swedish club, OK Tullinge. He ran the last leg and his team finished in 190th position.

The question is – Will any Irish club try beat 321st ? Setanta have tried, DFO have tried…. Who will be next? CorkO, LVO, CNOC, , GEN?

The pictures show the winning Kristiansand team, the 1500 or so maps waiting on lines for the mass start, Niamh O'Boyle on the run-in, sections of the Jukola maps and the crowds enjoying the sunshine. (Thanks to Kieran Rocks and the Jukola web site for the photos).


Posted by John McCullough at 11:32 No comments: 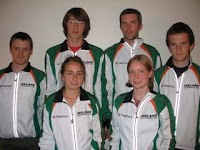 Follow the fortunes of the Irish team at the Nordic Championships and World Cup races in Finland here. There is up to the minute news of the team and photos, map sections and links.