Donegal 3-Day report
CNOC's Deirdre Ryan reports ...
On the June Bank Holiday weekend the Irish 3 Day event was held near the beautiful Lough Eske in the Bluestack Mountains of Co. Donegal. There were mixed feelings over returning to the challenging area as last year’s Irish Champs; for some it was a weekend of fantastic victories while for others the most vivid memories of that weekend were the pouring rain, the dense fog, the waist-deep marshes and the long haul to the start.
Just over a year later however everything was different. Saturday dawned warm and sunny, with not a breath of wind turning the wind turbines visible from the start. The event centre was at the local Community Centre, with a steep 1km walk to the start at Benson's Hill. Starts were not until 4 in the evening, meaning all the orienteers were relaxed and ready to race. All of the eight courses were very technical and of middle distance, but due to the blistering heat were surprisingly tough. The terrain was a fabulous open mountain with undulating hills, very intricate contour detail, many horrible marshes but very few tracks. Rock features were very useful for navigation.
Sunday morning came too soon, and once again too hot to be running in. There was a longer 2 km trek to the start, with longer courses and more climb. Day 2 started at Croaghmeenare, circling around some beautiful lakes and gruelling hills. Once again, courses were technically difficult only today they had physically challenging thrown into the mix too.
Nerves were running high on Monday morning as people tried to mentally prepare for the stressful Chasing Start at 10am. The winners of each course set out first, with the remaining competitors starting later according to the total time they trail. The first person over the finish line on each course was the overall winner of the weekend. At the start at Benson's Hill on Monday morning adrenaline was pumping and I for one was super nervous, starting first on my course. Courses were the longest yet, but luckily the sun stayed hidden all day and temperatures remained in the high teens. The area was the driest of any of the days, with many of the marshes having dried up a bit throughout the weekend, so terrain was more runnable today than the previous days. Out on the course, orienteers had to concentrate on their own race and remain completely unfazed by the many other hectic competitors out on the mountain, be they on their own course or not.
Minutes after the prize giving as everyone was making their way towards the cars, the heavens opened for the first time all weekend- lucky!
Overall the 3 day event was thoroughly enjoyed and well organised (thanks to WEGO!), with great orienteering opportunities on great new terrain. Hopefully CNOC will return next year to retain all of our titles! (Adapted slightly from the CNOC web site.)


The editor continues ... The closest and most exciting finish of the weekend was the sprint for the line by CNOC clubmates Sennen O'Boyle and Pat Farrelly in M50, with the timing unable to separate them. Pat went out about 4 minutes clear of Sennen who caught him on the final controls See photo above). David Healy (GEN) won the M21 class and Maeve O'Grady (DFO) the W21.
What always surprises me is that such a small bunch of people as Western Eagles, probably numbering less than 10, can put on a high-quality three day event like this at a location so far from their base. The courses were planned with a remarkable economy of controls, using SportIdent's ability to allow planning with criss-crossing legs. Planning easy courses for young juniors is difficult in an area like this and, if there was a deficiency, it was in achieving this. A minor quibble might also be the visibility of some controls on the senior courses - they could be seen from a long distance, but you still had to get across the terrain.
On the plus side, the area had dried out a lot from IOC last year, and the cuckoos were still in fine voice, so all in all it was a very successful weekend. In common with the Shamrock O-Ringen, the numbers of Irish competitors was relatively low but there was a fair smattering of runners from further afield: Germany, Scandinavia, Hungary and the UK at least.
Results are here, Routegadget is here. Photos are here. The results are presented as three distinct days which makes it a bit difficult to get the overall picture, but the Routegadget routes will capture some of the excitement of the competition and bafflement of the runners!
Next year there will be a Shamrock O-Ringen on the Sheep's Head Peninsula in Co. Cork on the June Bank Holiday weekend (4th-5th-6th June 2011)  mark it in your diary now. Details from Cork Orienteers. 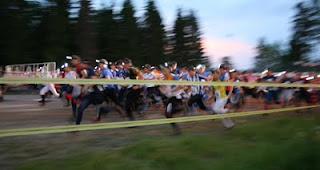 Watch the Jukola Relay in Finland live this Saturday here. More than 15,000 runners will take part in the Venla (women's) and Jukola relays this Saturday. At home the focus will be on the Northern ireland Championships at Tollymore in the Mourne Mountains on Saturday. Details here.

Irish Team travel to Scandinavia
Six members of the Irish elite squad are heading for Finland this week as the first leg of the 2010 Nordic tour kicks off. This is part of the team's preparation for the World Championships in Trondheim, Norway, in August - the selection races will be in Norway in July.
The Nordic tour consists of three World Cup events held in Finland, Sweden and Norway throughout June.
The Irish team of Niamh and Seamus O'Boyle, Gerard Butler, Darren Burke, David Healy and Nicolas Simonin start the competition this Thursday 17th June.
You can follow the team's performances on the Nordic Tour website here.
We also hope to have regular updates from the team members on the Irish blog here.


Posted by John McCullough at 23:08 No comments: