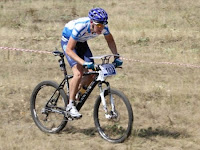 There will be two courses each day. More details from the indivual clubs as we go along ...!

In the big wide world of MTBO, the World Championshiops were held in Hungary in August on what looks like very dry, dusty, grassy terrain with some forest. Results, maps, photos and videos are on the web site here. There were long distance, sprint, middle distance and relay races, and sprint categories for juniors and masters.
Will we have any Irish representation at the next Junior and World MTBOC in Estonia in August 2013? Follow the event here.

Olav Lundanes (Norway) took the lead in the men’s race from the start – keeping everybody else behind until the start of the forking scheme. In the forking the Swedes Bergman and Lysell lost significant time – while Lundanes managed to keep the lead for most of it. Out of the forking,  Tranchand (France) and Kyburz passed the Norwegian – never letting Lundanes come back up. From there and on, Kyburz simply was faster than the rest – having time to cheer wildly in the run-in. Tranchand finished second.
In the women’s class, Emma Klingenberg took the lead from the start – and never gave it away. Into the forking scheme the Danish junior managed to shake everybody off – getting on with a 8-10 seconds lead to Helena Jansson (Sweden). Klingenberg kept running fast and orienteering well – and could take an easy victory 5 seconds ahead of Tatiana Riabkina with Judith Wyder in 3rd.


In the overall Nordic Orienteering Tour standings, Simone Niggli is still in a clear lead – although Helena Jansson reduced the lead down to 2:46. Judith Wyder in third is at 3:14. In the men’s class it is more open – with Kyburz being 1:27 ahead of Olav Lundanes with Thierry Gueorgiou in third at 1:59. With a sprint on Friday – Kyburz’s speciality – followed by middle chasing start on Saturday – nothing is yet decided. (From World of O). Read more here.

Nordic Tour is the last part of IOF Orienteering World Cup 2012. It starts with 2 competitions in the world famous ski center Holmenkollen in Oslo, Norway. After that there is a race in Göteborg, Sweden and ends up with 2 more races in Kajaani & Vuokatti , Finland. The distances are sprint and middle, and in Göteborg it is the new format Knock-out-sprint with gualification, semi finals and final the same day.  All races are being broadcast on national TV in Finland, Sweden and Norway.

Back in June the NIOA ran the Veteran Home International (in November conditions!) with the Individual at Meelmore in the Mournes and the Relay in Tollymore. helen Baxter was on the team, as well as being the Team Manager) ... Here is her report.

"For the first time in quite a while Ireland managed to produce a full squad for this event – no doubt helped by being on home territory. Having said we had a full squad it did require a number of last minute adjustments (recruiting) as the injury toll rose and caused a few to fall by the wayside. Could this be because we are Veterans?? In the absence of any other volunteers I had offered to take on Team Manager – safe in the knowledge, or so I thought that I would not be running. That didn’t last long and I found myself on the team – too late to give myself a stiff talking to about fitness levels! Being on home territory didn’t seem to give us much advantage, the weather certainly wasn’t on anyone’s side, however we gave the Welsh a run for their money and came an honourable 4th. Perhaps a longer build up and selection process is necessary! A number of the team put in some notable performances in the individual races – Marcus Pinker was 1st by 4 minutes on M35, Steven Linton 3rd in M45 and Aonghus O’Cleirigh  3rd in M50, Ruth Lynam came 2nd in W45 and  Jean O’Neill 3rd in W65. Everyone else gave their all and possibly their breakfast after the run in on the relay – the photos on the website are worth a look to see the effort on everyone’s face. A stray branch on some of the relay courses allowed a few to give blood as well as sweat and tears for a more dramatic finish.

I learned a few things over my short time as Team Manager: organising orienteers is like herding cats only more difficult; it’s hard to brief your team if you are one of the first out; having watched the other teams go into huddles for a team talk before the BBQ I’m obviously missing something – was it a psychological pep talk or did they really not know each other and were doing introductions?  4 bottles of wine is definitely not enough for a full Irish team.

To all of you who volunteered - thank you all for your efforts - you were great. Thanks too for the bottles of wine you gave me – just as well it was on Sunday morning rather than Saturday night. I think I enjoyed the experience (perhaps not the hirpling round Meelmore) and hope to continue as Team Manager – unless someone else is mad keen. I hope to start the selection process (recruitment drive) earlier next year but it is never too soon to let me know if you are interested- so that I can keep an eye on the results you understand. Any hints on pep talks gratefully received.
I might even get next year’s report done on time!"
Other Home Internationals are coming up soon too: The Seniors (M/W 20 and 21) are based at Pitlochry in Scotland on September 22/23 and the Juniors (M/W 14, 16 and 18) are near Gatwick Airport in south east England on October 13/14. Teams are expected to be announced very shortly.
Good luck to all the Irish teams!


Junior Home Internationals 2012. This event will take place in Surrey, England on the weekend 13/14th October. The following team has been selected.

M14 Eoghan Knight, Ruairi Long, James Millar, Robert Pim
M16 Jonathan Quinn [the 3 remaining places plus 1 reserve are to be chosen from the orienteers listed alphabetically below: decision pending… Frazer Howe, Peter Meehan, Cathal O’Cleirigh, Paul Pruzina].
M18 Eoin McCullough, Jack Millar, Laurence Quinn, Mark Stephens
Exotic Events Coming Up!
Autumn throws up some interesting competitions along with the usual Leage and other races. How about some of these?
August 26th - we've just missed LVO's event on the Copeland Islands off the coast of Co. Down ...
September 1 - Mountain Bike O - Djouce Woods, Co. Wicklow - SET
September 15 - Mountain Bike O at Carrick Mountain, Glenealy, Co. Wicklow - 3ROC
September 22 - London City race
September 23 - Southern Championships, Epping Forest, England
September 30 - Leinster Championships,  Carraig na Seabhac, Wicklow - Ajax. This area was mapped for the 2011 Irish Champs but wildlife restrictions meant that it could not be used in May.
September 29-30 - Brie 3-Day near Paris, including a night sprint around Eurodisney after closing time! Three races in two days.
October 6 - Northern Ireland Championships, Binevenagh, Co. Derry - NWOC. See a map of the area with its spectacular cliffs here. The area has been extended for this event. The Irish Trail O Championships are on at Binevenagh Lake the same day - now is your chance to try it! There's also a night event on Saturday evening and a sprint in the University at Coleraine on the Sunday.
October 7 - MTBO, Curragh, Co. Kildare - CNOC
November 10-11 - Street O in Venice, MOV2012
November 25 - Connacht Championships, Knockbarron, Co. Offaly. Not in Connacht, but a super little area of eskers. *** Since changed to Portumna, Co. Galway***

We are delighted to welcome Thierry Gueorgiou to Ireland in October for a training weekend with the Irish squad. Thierry is the current world number 1 and 10-time world champion – see an impressive list of achievements at World of O here.
The weekend (October 20/21) will be held in Tollymore forest, Co. Down and Carlingford Mountain, Co. Louth. This is a beautiful part of Ireland and will provide both forested and open terrain.
For more information, contact Niamh (niamhoboyle at gmail dot com)
You can watch Thierry and the rest of the world’s elite in action via GPS and live TV in the final round of the 2012 World Cup this week. See the Nordic Orienteering Tour website for details. (Niamh O'Boyle)
Photo above: Thierry takes the WOC middle distance title in France, 2011 (courtesy of WorldofO)
Posted by John McCullough at 23:50 No comments: