IOC 2012
The annual Irish Orienteering Championships is the flagship event of the orienteering year. It should provide the best competition, the best courses and the best maps and be supported by all the orienteers in the country. How many sports are there where you can just send in your money and enter the National Championships? There isn't even a stipulation that you have to be in an orienteering club to take part, only to win a title.
In reality, the numbers at an Irish Championships don't always include all the orienteers in the country, any more than the numbers running in today's National Cross Country Club Championships add up to the number of cross country runners in the country. What is it about Championship competitions that seems to put people off?
This year's Irish Championships, due to be staged at on the Dingle Peninsula in Kerry on the May Bank Holiday weekend, has thrown another factor into the mix: the cost of entry fees.
Orienteering is generally a cheap sport to take part in: your average Sunday competition will cost about €8 for an adult club member. Compare this with upwards of €20 or €25 for a road race, and maybe €75 or more for a marathon and you'll see what value we provide. Usually there is a substantial reduction for juniors, students and families, so that in general your family's day's outing should cost no more than about €20 in entry fees for a local event. Obviously Championships cost more because of the cost of prizes and other overheads. The cost of map production is spread over the lifetime of the map and events in remote locations which may attract small numbers are subsidised by events in local forests or parks which can generate a large surplus.
The announcment of the entry fees for IOA 2012 was greeted with surprise on the Yahoo O-groups forum, generating some correspondence and negative reaction. The initial high fees (€29 for adults for the middle distance, €39 for the long distance and €78 for a relay team at the cheapest rate) have since been reduced and the entry dates modified, but little has been done to address the cost of junior and family rates. This is a huge jump from any entry fees we have ever paid. Look at some other events: British Champs STG£19 for an adult, including £4 for parking and bussing; JK2012 from £16 per day for an adult, less than half that for juniors; Swedish O-Ringen from €112 for five days for an adult) ...
The initial negative reaction may prove hard to overcome and the IOC will suffer as a result. The real winners may be the 3-Day in Galway at the beginning of June where three days of orienteering are promised on new maps of complex areas at less than half the price. Competitors from Northern Ireland will have the option of going to the British Championships in the Lake District the same weekend as the Irish Championships.
A further area of concern was the legibility and detail of the maps. Three open sand dune areas will be used and the organisers were advising competitors to bring a magnifying glass to read the detail. We saw this approach at last year's World Championships in France and I must say it did not add to the enjoyment of the competition. The skill in using the new LIDAR base maps, it seems to me, is in knowing what to take off the map rather than in what to put on. It brings to mind the paradoxical Borges short story "On exactitude in science" about a map of the world at 1:1 scale - see here.
I doubt if anything I say here will persuade people to go if they have already made up their minds one way or the other, but I think that having an affordable entry fee would encourage participation, increase numbers, bring better competition and make the event into a true Irish Championships: the Ryanair approach rather than the high-cost airline approach. I wish Bishopstown every success with IOC 2012, but orienteers will vote with their feet and it will take a considerable charm offensive to counteract the rather negative feeling the event has already generated. At the end of the day, the Irish Championships is the Irish Championships.
The question does arise, however, as to what IOA's responsibility is regarding the Irish Championships. Recent IOA Executive Meeting minutes clearly convey the concern of the national governing body for the success of IOC and they have offered advice as to how the event could be made more affordable. The IOA concern includes the technical aspect (that the areas, maps and courses will be of the required standard) but should their involvement not also include some financial oversight and broad approval of budgets? This is to maintain the status of the event and also to protect the organising club.
Details of IOC are on the Bishopstown IOC website here. The least expensive entry fees apply until February 29th.
*Since posting this, BOC have been in touch to point out that the entry fees have fallen further and the cheapest entry date has been put back to March 7th. Check the IOC web site for details*

IOA news: Course planning
There are still some places available for the IOA one-day Planning Workshop on Saturday 31 March at the Hilton Dublin Airport Hotel, Northern Cross, Malahide Road, Dublin 17. It is being led by Graham Nilsen of MEROC who is a very experienced planner and controller.
Graham was the author of the British Orienteering Course Planning book that was first published in 1995 and updated in 2006. He controlled Day 3 of JK 2011. The Workshop will include sessions on planning for different types of competitions, and for the different classes of competitor. A session will discuss the standards for the Irish and regional Championships. A practical planning exercise will take place in a neighbouring complex area.
The subsidised cost of the Workshop is €25 that includes the cost of lunch. To book a place you should send a cheque for €25 to Aine Joyce, Irish Orienteering Association, 13, Upper Baggot Street, Dublin 4.
The Workshop is limited to 20 participants and places will be allocated on a first come first served basis. The course will run from 9.30am to 6.00 pm. It may be possible to reserve a place by e-mailing Áine at osec@orienteering.ie.
A further Planning Workshop will be held later in the year at a location convenient to orienteers based in the south and west.
Harold White, Controller of Technical Standards

Marathon Madness
Time was when orienteers embraced the marathon enthusiastically. It was something you just had to do. Rooting through some old stuff recently I came across the results of the 1983 Dublin Marathon and saw a number of familiar names. In the 8688 finishers, the fastest orienteer I noticed was Donal Burke, then of LeeO, at 2.38.52 in 101st place. Donal has had knee refurbishment work recently and is back running again. His son, Darren, is on the Irish WOC Squad. Other sub-three-hour names which you might recognise were Pat Healy (2.51.19), the late Eddie Gaffney (2.51.20), Justin May (2.51.27), Seán Cotter (2.51.47), Deirdre Nagle (7th lady in 2.55.01) and John McCullough (2.55.43).
Are any orienteers running marathons nowadays? Did Eoin Rothery (winner of the Trinity Marathon back in the '70's), Carey May (Winning lady in the first Dublin Marathon) and Jean Folan (first woman to run a marathon on Irish soil in 1979) start a trend which fizzled out? Have adventure races and other extreme sports taken over? If so, can we attract these people into orienteering? 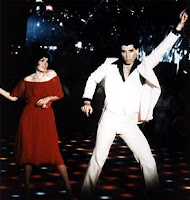 Saturday Night Fever
The Dublin by Night series of six night events on Saturday nights has finished with Ruairi Short a clear winner on the Long course competition with Gerard Butler second and Aonghus O'Cléirigh third. Ruth Lynam was best women on the Long course in 9th. Roxanne White won the Short course series followed by Eileen Walsh and Colin Walsh.
Numbers at the races were fairly steady and all the events set different challenges. From Howth (golf courses and rhododendrons with fantastic views over the city) to Phoenix Park (longest courses), Ballinascorney (very dark, very muddy tracks), Barnaslingan (huge crags over the Scalp), Slade Valley (mist and probably the last time the area can be used before felling ...and, by the way, what was the map scale again?), and the final on the Curragh (controls below ground level).
Thanks to everyone involved - it was a great series and anyone with a torch and a reasonable command of orienteering would enjoy these events. Watch out for next year's series. Perhaps the organisers would consider awarding points for controllers, planners and organisers to compensate for missing the event they ran for the others?
If you can't wait, you could run one of the big Scandinavian overnight relays (Jukola or Tio Mila) or the Harvester Trophy in the UK. (The 2012 Harvester is on July 1st at Bordon Heaths in Surrey, run by BAOC). For night owls who want to run in the dark without a map, try the Dublin night 10K on April 29th (see here), or look out for the series of night time trail runs on Thursday nights in Northern Ireland (see here). The final race is in Barnetts Park, Belfast, on February 28th.
Incidentally, if you're running the Dublin race, bring your sunglasses: the race seems to start at 8.30 pm but sunset, according to my calendar, isn't until 8.52 pm ...

Shamrock AR
We've had the Shamrock O-Ringen three day orienteering competition, now we have the 24-hour Shamrock Adventure Race, sponsored by Basecamp. It's being run largely by a group of orienteers, including Eoin Keith, Sarah Ni Ruairc, Kevin O'Riordan and Diarmuid OColmáin, and will be based in the highest village in Ireland, Roundwood, Co. Wicklow on March 31st-April 1st.
The race starts at 1 pm on Saturday and involves teams of four (with at least one female) navigating, running, mountain-biking, kyaking and otherwise making their way around the course, with additional challenges. The race is limited to 16 teams. Entry fee is €500 per team (that works out at about €5 per person per hour). There is a talk on adventure racing at the Basecamp shop in Abbey Street, Dublin 1 on Thursday 1st March at 7 pm. More details here. 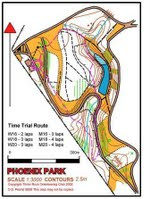 Both the Senior and Junior Squads will have a training weekend on 10th/11th March: the Seniors, led by Darren Burke, at Crohane, near Loo Bridge in Co. Kerry, used for the 1998 World Cup races, and with a night-O in Killarney, followed by a Munster League event in the Nagles Mountains on the Sunday; the Juniors, meanwhile, will be based in Leinster. Their activities will kick off on Saturday with the time-honoured time trial circuit in the Furry Glen in Dublin's Phoenix Park, followed by O-training on Saturday and more on Sunday at Stradbally, Co. Laois.

SligO: Gerry Foley of Sligo has sent in some old O-maps of Union Wood and other woods around Sligo from the early days of orienteering in the area. The maps were black and white photocopies with few if any contours and look more like the "Here be monsters" maps of the olden days than they do orienteering maps. Gerry writes of the map above "Away back in the early 1970's a small group from Sligo Mountaineering Club used to run orienteering courses in Union Wood, Co. Sligo. Attached is a copy of the map we used. I surveyed and drew the map which was based on the O.S. map of the area. We occasionally ran events for local scout and school groups."
Those were the days when the control description "The boulder" meant it was on the map and "A boulder" meant that it wasn't. Now that was an adventure sport! (Click on the map to enlarge it).
Posted by John McCullough at 17:21 1 comment: