A full list of orienteering fixtures ranging from mountain bike through Championships to Internationals starts this autumn. After a busy summer for our international representatives in the Czech Republic and Finland for the Junior World Champs and the World Champs itself, the focus now is on the action at home.

Setanta are running the only MTBO event on the fixture list at Djouce on Saturday 31st August - last year's event combined route-choice with some very steep and technical small tracks (too tricky for me to ride!), but so far no other clubs are following suit - maybe if there was a Leinster orienteering organisation some more coordination between clubs would happen.
Fingal, meanwhile, are running three scatter events in the Dublin area, including some new maps, and the energetic folk in Western Eagles are staging the Connacht Championships on September 15th at Ballymahon (- so what if it's not in Connacht: if Galway can play hurling in Leinster and London can play in Connacht, what's a few miles across the Shannon between friends?). Entries open until 6th September - details here.
On the Home International front, the Juniors (M/W14-16-18) travel to south Wales for the Junior Home International on the open limestone moors on September 14-15, while England, Scotland and Wales come here for the Senior Home International in Co. Louth (M/W20 and 21) on September 28-29, hosted by Fingal (Relays at Carnawaddy on Saturday) and 3ROC (Individual, combined with the first Autumn Leinster League event at Carlingford on Sunday). The Veteran Home International (M/W35-65) is in Norfolk on October 5th/6th.
In Munster, the Cork Autumn League and the CorkO Autumn Leagues are starting, plus the Munster League, the Kingdom League in Kerry and the South East Short-O series (including Kilkenny Castle
In between the JHI and SHI, the 34th Mournes Mountain Marathon is on September 21-22, but entries have probably closed for the event. (This weekend also sees some Irish orienteers travelling to London for the 6th London City Race, starting near Greenwich, and combined with an UltraSprint race the day before).
Slightly further away, timewise, are the Northern Ireland Championships at Meelmore in the Mournes on October 12th (Saturday) and the Munster Championships at Toureen Wood, near Cahir, Co. Tipperary on November 3rd. The Juniors have their eyes on the European Youth Championships in Portugal from October x to y.
The full list of IOA fixtures is here, with Northern Ireland fixtures here.

Finland: Mike Long reports on the Junior Tour to the World Championships at Vuokatti -

A party 28 juniors and parents attended WOC 2013 in Finland and occupied four adjacent apartments in Kajaani Polytechnic School. A fantastic week was had by all. Proof of this was that there was much discussion on a similar trip to WOC 2014 in Italy before leaving for home. There was a separate group of Irish Seniors (who were competing at WOC) in Vuokatti but contact between the two groups was very good, as Paul O'Sullivan Hourihan (manager of the senior squad), was staying with the juniors.
The week involved competing in the Kajaani Open Week, which was run in parallel with WOC and on the same terrain, and spectating at the WOC events as well as supporting the Irish contingent. Some training was also organized by Ruth Lynam and we also competed in a sprint event on the same course as used by the elites for qualification.
The events were held on two distinctly different terrains. Days 1 and 2 were in beautiful open forest on a very runnable moss cover floor. Thierry Gueorgiou described it as being like a cross country run”. Days 3 and 4 were in extremely complicated terrain (some of which was not unlike France in 2011).
Competition-wise our best result was Ruth who finished in 5th place of 74 finishers in the W55A category and was our only prize winner.
You can get some of the excitement of the WOC week from the Elite bulletins which were issued each day during WOC: I'll add them if I can figure out how!

Scotland: John McCullough was one of a number of Irish orienteers who went to the Scottish 6-Day, Moray 2013.

The temptation of running for four days on forested sand dunes, an urban sprint and two days in classic Highland forests was too much to resist. Moray 2013, in the region south east of Inverness, returned to the area of the sixth World Championships in 1976, the first in which Ireland took part: the names Culbin and Darnaway resonate with anyone as obsessed with orienteering as I was in those days!
More than 3000 competitors from across Europe and further afield were attracted by the reputation of the event which was enhanced this year by the selection of this part of  Scotland as the venue for the 2015 World Championships, tied in with the next Six-Day.

The event centre at Brodie Castle also provided space for tents and camper vans, but competitors were staying in all kinds of accommodation throughout the region. Days 1, 2, 3 and 5 were on forested dunes, with a sprint on the rest day after Day 3, and classic Scottish forest on days 4 and 6. Very heavy rain on Day 1 at Lossie kept the runners cool: a narrow strip of complex dunes along the coast, but spoiled by a big motorbike track all along the complex part which made the navigation easy. The inland part of the area was pretty featureless but did have some detail in contours and vegetation. All the sand dune maps were at 1:7500 scale with 2.5m contours. 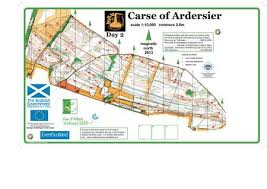 Day 2 at Carse of Ardersier had long ridges of low parallel dunes, with some more complex areas nearer the sea. Summer returned, with sunshine and heat. A novel idea today was a Limerick competition, which could include a rhyme with the name of the area "Carse" but without using the obvious ...
Each day the parking areas were close to assembly so that long hikes were minimised, though there were a couple of long walks to the start. The usual traders, food stalls and other services were on hand each day.
Day 3 at Culbin, used for WOC 1976 and to be used again in 2015. We were in the western part, the least interesting section. Hundreds of small hills scattered randomly across the map; energy-sapping heather and brashings on the ground. Lesson 1 (learned half way around the course): go around the tracks, not straight through the forest.

Wednesday was a rest day, with a chance to run in a sprint race or go to a mountain bike orienteering event. We chose the sprint at Lossiemouth, right beside a busy RAF fighter base. Those luck enough to have entered early got a course around a tricky housing estate with lots of alleyways, followed by a section in a big gravel-pit: it may not sound very promising, but it provided a real challenge, with winning times in the low teens of minutes. This was also the first day of the Euromeeting: three days of orienteering at sprint, middle and long distance in WOC-relevant terrain. Juniors and later entries (such as myself) were limited to the gravel-pit section, which was OK but lacked the variety of the houses. (British Orienteering rules prohibit juniors running where there may be traffic).
Interestingly, two of our younger orienteers, Laurence and Jonathan Quinn,  outran five of the Irish Men's team in the Euromeeting in today's sprint race ...

Day 4, Loch of Boath, again saw the return of the rain. Moderately contoured forest, a 1:10,000 scale map, and lots of heather and fraughans underfoot meant that you knew you were in Scotland. Some tracks, but not where you want them; 5 metre contours - lots of them, but very few black (rock) features: fifth day running in a row - legs are starting to tire. This was the middle distance race for the Euromeeting, with 8 Irish men and 3 women running.
Day 5, back to the sand dunes of Roseisle: sunshine, sea, forested sand dunes: a lovely area, with a map-exchange for the longer courses. A long way to the start (the organisers weren't able to use the original route) so I only arrived, well warmed-up, as my name was being called! 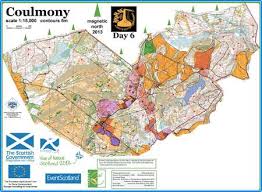 
Posted by John McCullough at 00:14 No comments: