O-La-La!
If you go down in the woods today, you'd better be prepared - if they're French woods, that is. Legislation passed originally in March 1999 and adopted by the French Orienteering Federation (FFCO) in March 2008 requires that anyone taking part in an orienteering competition in France must have either a competition licence issued by your O-Federation or a medical certificate to prove you're fit and are not taking drugs. It seems to be driven in part by the anti-doping policy of the FFCO.
The letter from FFCO General Secratary Gérard Lecourt to National Federations is here. If this is enforced it will be a major disincentive to foreign orienteers competing in France. The event organisers will keep a copy of the certificate in case of any incidents. French competitors evidently have an annual competition licence which involves a medical examination and a declaration by your doctor that you are fit to undertake an orienteering course - the French medical cert is here. If you'd like to read the full medical regulations (in French) you can see them here. The medical is expected to include ECG's and various other examinations and is aimed at finding out if you have any contra-indications which would suggest that you should not go orienteering. A comprehensive but non-exhaustive list is included in Appendix 1 of the document - the one malady which seems to be absent is hyp-O-chondria.
If this had been published on April 1st I wouldn't have been surprised, but it seems to be for real.

On the other hand, French World Champion Thierry Gueorgiou may be able to help your orienteering technique:

Tero's technique (from a Swedish newspaper interview with Thierry Gueorgiou:)

"I have the experience necessary to not be bothered [by contact with spectators, cameras in the forest, etc]. I've also done orienteering training with headphones and a radio to practice my ability to keep concentrated despite external distractions," he says.

How do you describe your strength as an orienteer?
"I trust my ability to correctly simplify the map," he says.
When I give Tero a map and ask him to sketch how he sees the map between two controls, I get back - in a few seconds - a sketch that would be a completely functional simplification of the challenges the leg has.
Of about seventy map symbols, he has picked out five. What looked like a difficult orienteering leg now has the difficulty of a beginner's course. Through this approach, his course becomes easier than his competitor's, I think, and test my idea on the world champion, who laughs, "Yes, that is right; that's the right way to describe my orienteering technique."

This ability to simplify the map is something Tero practices continually. And he doesn't need to go out in the forest to keep it.

"You can train anywhere. You're brain doesn't notice the difference between a picture of reality and a mental image," he says. This method requires a lot of concentration. But staying focused for an entire race is, according to Tero, impossible. When competitors try to continually force themselves to have a deep  and long-lasting concentration, the professional from looks for  opportunities to rest.

"Everyone talks about having to be 100% focused from start to finish, but that doesn't work. The key is to know when you  can relax. During my middle distance final in there were several parts of the course when I was thinking about things other than orienteering," he  says.

3ROC's Seán Rothery has just published another book, this time recounting his life in Africa in the 1950's. Best known for his books on architecture (his "Field Guide to the Buildings of Ireland" (1997) features many buildings which will be familiar to orienteers from their travels around the country), Seán was one of the founders of Irish orienteering and also the father of frequent Irish Champions Eoin and Colm Rothery.
His new book, "Snow on the Equator - an African Memoir" is published by Ashfield Press.

Posted by John McCullough at 23:37 No comments: 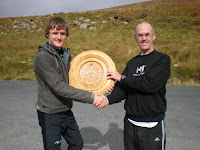 Fingal Orienteers take Leinster Inter-Club trophy competition.
A surprise result saw north county Dublin club Fingal Orienteers snatch the Leinster inter-club trophy from under the noses of CNOC and GEN at Corkagh Park, Clondalkin, on September 20th.
The event format has changed from year to year, ranging from a full-scale event, through score formats to this year's sprint, with equal points being awarded in every age class.
The club scores were
FIN 1383
CNOC 1360
GEN 1047
3ROC 927
AJAX 490
SET 320
The excellent new map by Pat Healy showed the area to be ideal for this type of race: the area had been mapped some years ago but the park has grown and matured in the meantime from the bleak, fairly featureless terrain it once was.
The photo shows David Healy of the organising club, GEN, presenting the trophy to Val Jones of Fingal. (Photo: Finn Van Gelderen).
One side effect of winning the trophy in the past was that the winners had to organise the event the following year. See the individual results here. More details on the GEN site here. 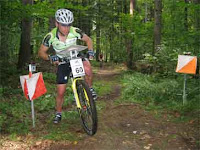 Northern Ireland Mountain Bike O-Championships postponed
It is regretted that due to access problems LVO have been forced to postpone the MTBO Champs which were to be held at Castlewellan forest on 10th October, (not 10th November as stated in an earlier TIO blog - Ed.). It is hoped to re-stage the event near the end of November so keep an eye out for that!! 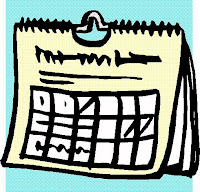 Munster Champs closing date reminder
The closing date for the Munster Championships at Toureen Wood, Ballydavid, near Cahir in Co. Tipperary on November 1st is Wednesday 14th October. For Dublin orienteers, there's motorway most of the way now, so you should make it in two hours or less ... Enter on-line here.

Junior Squad Train
The Irish Junior Squad had another intensive training weekend on October 10th/11th, starting with the well-established time trials in Dublin's Phoenix Park. If anyone tells you that the Park is flat, just ask any of the juniors who gave their all running laps of the gruelling circuit in the Furry Glen! This was followed by compass work training at Massey's Estate (beside the Hellfire Club) on Saturday afternoon, and more technical exercises at Knockree Youth Hostel that evening. Sunday's training brought the squad to the open mountainside of Trooperstown Hill and finished in the mixed Scandinavian or Scottish-style forest beside the Avonmore River.
Once again, all due to the efforts of IOA Juniors Officer, Ruth Lynam.
Read more about the Junior Squad here. 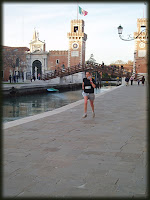 Busy weekend in November
The weekend of November 14-15th is a busy one for orienteers: the Veteran Home International takes place in the Peak District of Derbyshire between Ireland, Scotland, England and Wales; there is an OCAD computer-mapping course in Dunboyne, Co. Meath, given by Pat Healy (Details here); some Irish runners are going to the annual street-O event in Venice (read about it here); and local events at Ross Castle (Killarney), Corrin Hill (Fermoy) and the Glen of the Downs (Wicklow).

Teaser: The odd one out is the Munster Championships. It's the only one to have always been run in the area described by its title. We've had the Leinster Champs in Ulster (Monaghan, 2009), the Connacht Champs in Leinster (Offaly) and Ulster (Donegal), and the recent Northern Ireland Championships in Cavan, in the Republic!
Posted by John McCullough at 16:44 1 comment:

Ireland defeated Wales in the Senior Home International run by Fermanagh Orienteers this weekend. The competition was on the limestone hills on the Cavan/Fermanagh border, in conjunction with the Northern Ireland Championships.

Read all about it on the Senior Squad blog here. See maps, courses and Routegadget here.
Posted by John McCullough at 23:28 No comments: