A belated "Happy New Year" to all our readers. There's lots of exciting orienteering in prospect for 2014, with new areas both at home and abroad; night-O, Sprint-O, a World Championships, and accessible multi-day events in Wales and the English Lake District. The Juniors have some interesting plans too, with the prospect of training in Norway for next year's Junior World Championships as well as a trip to the JK at Easter in Wales and maybe to the Lakes 5-Day in August.

A brief look back ...
One of the series of events this year is the Campus Sprint races to raise money for the Junior Teams. Two events have already been held, at Waterford Institute of Technology in October and at Dublin City University in December.

The DCU event offered entrants a choice of a map in English or Irish, and planner Kieran Rocks used a seasonal Christmas tree as a control site, while one of the other sites, a statue, looked like something from Easter Island! (The juxtaposition of these festivals reminds me of the quiz question "When did Good Friday fall on Easter Monday?" - the answer is at the bottom of the page.) Further events in this rather scattered series are rumoured to be in UCC on February 15th with further events in TCD on 1st March and others at unspecified future dates...

As usual at this time of year, TIO reviews some of the interesting events both at home and away, for the coming twelve months. Ireland, Portugal, Italy, Finland, Sweden, the UK and Brazil all feature. Even if you can't go to any of these events, you can get lots of fun from looking at the websites!

Spain and Portugal are attractive destinations in the early part of the year, and this year sees multi-day events in Andalucia (February 14-16) with a World Ranking Event (WRE) at Punta Umbria, near Huelva, with training during the following week - not far from Faro airport (see here) , and the Mediterranean O-Championships in Portugal on 21st-23rd February, again with WRE's, 160 km east of Porto, with a middle, sprint and long distance race (and some Irish already travelling) - see here. Who cares if it's not really on the Mediterranean if the entry fee is only about €20 for three days? The same weekend, there's an interesting concept at the Kvarner Bay Challenge on Cres Island in Croatia, where the entry fee is whatever you decide it's worth - see here. Moving north, the Swedes come out of hibernation on February 28th with the Pan-Spring at Kristianstad with night, middle and long races close to where the 2014 O-Ringen will be - see here for entry details.
Early March has the Portugal O-Meet at Gouveia, in the middle of the country, from March 1-4. This has two middle and two long races, a night sprint, and trail-O, plus training opportunities. A week later you could run on the karst limestone terrain of Slovenia at the Lipica Open. If you're taking off for St Patrick's weekend you could go to the Mediterranean Open Champs in Tuscany on March 13-15. The event has a sprint, a middle, and a sprint in Florence. There's also a pre-World Championships training camp near Venice from March 9-13. If you want to stay at home that weekend, there's a sprint race in the walled city of Derry on the 15th, with a middle distance race the next day in the same general area adding up to 5 races in three days. There are also hints of a long-O type event in the Galtee Mountains on March 15th/16th where Bishopstown Orienteers are celebrating their 25th birthday (details here), where there's also a CorkO Munster League event in the same area. Back in Scandinavia, the Danish Spring event, marking the end of winter, is on March 22-23 in North Zealand, north of Copenhagen, with sprint, middle and long races but no relay.
Moving into April, CNOC's Leinster Championships at Dysert, near the Rock of Dunamase in Co. Laois, is on the 6th. Further afield, there's a World Cup race at Murcia in southern Spain on April 4-6, followed by the European Championships at Palmela, just outside Lisbon, in Portugal from 9th-16th, that's roughly the week before Easter. Between then and Easter, the Riga O-Week in Latvia takes place (15-21st) in the 2014 European City of Culture, and the Spanish Championships in Andalucia (17-21st) where the Malaga orienteering club are also celebrating 25 years. At Easter, the Jan Kjellstrom O-Festival is in south Wales while there are also multi-day events in Prague (18-20), Sardinia (18-21) and Bulgaria (18-21).

The Irish Championships in Kildare and Wicklow kick off the month of May: a sprint on a new map of Maynooth, and middle, long and relay races near the Wicklow Gap. The same weekend, the big overnight relay "Tio Mila" is on in Sweden. 2014 is a big year for orienteering in Italy: at the end of May, there's orienteering in Trentino, in the mountains north of Venice, the "3 days of Trenches", to commemorate the area where there was fighting in the First World War 100 years ago. This is followed by the regular "Highlands Open" WRE on June 1st.

Apart from Western Eagles Three-Day in Co. Galway on May 31-June 2 and the British Championships near Newcastle on 31st/1st, , there's also a 3-day in Belgium at St Hubert (June 7-9th) and the 11th European Rogaining Championships in Estonia (7-8th). Moving towards the main orienteering holiday season, the 66th Jukola 7-person overnight relay in central Finland is on June 14-15, with the Venla women's relay in the afternoon of the 14th: thoroughly recommended. This is followed immediately by the Tallinn O-week in Estonia. For anyone searching for something a bit more exotic, there's a 3-day in Iceland on June 27-29 and there are also a competition in Greenland (July 2-5). (A new airline called Wow Air flies from Gatwick to Iceland). Back in Sweden, at Salen (location of the 2008 O-Ringen where the Irish Juniors went on tour) there are 3 days competition on June 27-29, and three evening races in Stockholm on June 30-July 2, allowing you to be a tourist in the daytime and an orienteer in the evening.

Peak multi-day event time starts in July with the Sorlandsgaloppen (July 3-6) in southern Norway, but a big attraction will be the World Championships in Asiago in  northern Italy (July 5-13) with the associated Italian 5-Day open to everyone and including a sprint race in Venice. Clashing with this is the Fin-5 five day in (you guessed it!) Finland, at Kuusamo, from 6th-10th. Rather more out of the way is the Romanian "Transylvanian Open" at Cluj (July 10-13) leading towards the Junior World Championships at Borovets in Bulgaria from July 21-17. (Cluj is the venue for the 2015 European Youth O-Champs - the 2014 EYOC is in Macedonia on June 25-28). A longer event is the Kapaonik Open in Serbia (July 10-20). In Switzerland the Swiss O-week returns to the spectacular setting of Zermatt at the foot of the Matterhorn from July 19-26 and overlaps with the 50th Swedish 5-Day O-Ringen in Skane from July 20-16. The world's biggest orienteering event promises lots of seaside forests in sunny southern Sweden - the O-Ringen is a must at some stage in your orienteering career!
Croatia, Slovenia, Norway and Slovakia also have multi-day events in July, and the World University Championships are at Olomuoc in the Czech Republic, location of WOC 2008, from August 11-17.

In August the closest multi-day event to us this year is the Lakes 5 Day in the English Lake District (August 4-8), promising varied terrain and lots of international competitors, but lake district traffic and accommodation are issues you may also have to contend with. In August, Slovenia hosts the OO Cup (1-5th) on what looks like spectacular Alpine terrain, and there's a 5-day in Spain, 240 km north of Madrid on August 5-10 and a 5-Day at Uslar in Germany (4th-9th). The World Rogaining Championships are in South Dakota, USA, on August 16-17: "Rogaining" is long distance orienteering where you visit as many controls as you can, like a score event, but over a 24 hour period. Back in Hungary, the Hungaria Cup runs from 16th-20th near Budapest, then Greenland beckons again (August 23-25). For army orienteers, the CISM Military World Championships are in Austria from 24th August.

By September the big multi-day and holiday events are over,but there's still plenty of good orienteering on, notably a series of four city races in London, Barcelona, Edinburgh and Porto. The London race, on Sunday September 21st, has an urban race in Guildford the day before; the Porto race in Portugal on October 3-5 has a night event, relay, score and city races. Edinburgh (11-12 October) features city races at Edinburgh and Stirling Castles, and Barcelona (1-2 November) with a sprint in Nou Barris Park and an urban race around the Old Town, complete the City Race Euro Tour.

Meanwhile, back in Italy, Croatia and Montenegro there's 10 days of orienteering from Sept 29 to October 10: what a way to end the summer! Moving on, how about the 11th Istanbul 5-Days (October 29-November 2) which sometimes features a night race in the Grand Bazaar. For the more ambitious, the World Masters O-Championships (for over 35's) are in Brazil has sprint, middle and long races from November 1-8.

At the end of the year, you have a choice of the warm or the cold ... the Sylvester 5-Day in Belgium (December 26-30) or five events in the Canaries (Dec 27-Jan 4 2015).  Then, to look forward to in 2015 we have the World Championships coming to Scotland in August with the Scottish 6-Day, hopefully a Shamrock O-Ringen in West Cork in June, and the Swedish O-Ringen and the World Masters back to back in SW Sweden.

Fore more details of these events,and of many more, visit the World of O web site. Thanks to CompassSport Magazine, the IOA web site www.orienteering.org and World of O for the information I have extracted and presented here.

Finally, here's an interesting street map for you: do you recognise it? Look closely to read the street names. 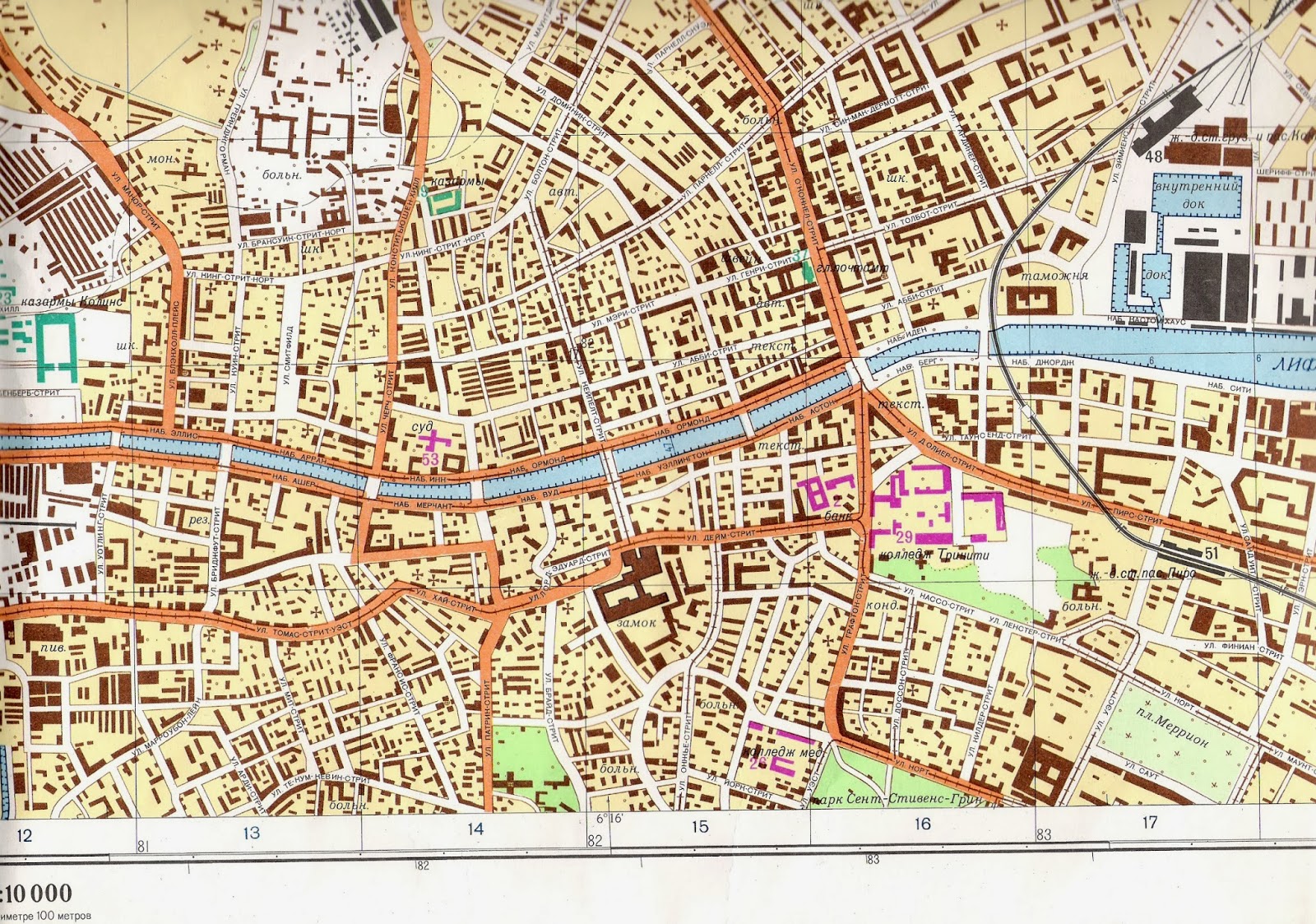 During the Cold War, apparently the Russians mapped cities and towns all over Europe and Dublin was no exception. This 1970 map shows (obsolete) tramlines and the uncrossable river Liffey and the text is in Cyrillic script, incidentally named after Saint Cyril. See more here.

That's all for now.


Posted by John McCullough at 23:12 No comments: