Irish 3-Day, Co. Galway
Neil Dobbs (WatO/HVO), home from America, took the M21L class at the Irish Three Day in Galway on the Bank Holiday weekend, with Ruth Lynam (CNOC) taking the W21L title. Three testing open mountain areas south of Oughterard provided the terrain and the weather provided an additional challenge. After a week basking in the sun, the weather gods took their revenge on the Saturday evening and Sunday, with swollen streams, low visibility and uncertainty about what to wear.
The short courses at Sruth an Iolra on Saturday evening needed concentration to relate the map to the terrain, particularly in the boulder department, where the features seemed to me to be shown rather selectively. Some controls were visible from afar, which reduced the challenge, but the event was a good warm up for the classic race on Sunday.
Sunday's race, planned by Martin Flynn, on a 1:7500 scale map, was a step up from the day before: navigation from start to finish, with long legs traversing the area, and an excellent area (reminiscent of open Welsh or Fermanagh limestone hillsides with sink holes and rock features) certainly challenged the runners: lots of finishers coming in with a rueful shake of the head, as much as to say "if only I'd been more careful!".
The weather picked up for Monday, back at 1:10000 on an extended version of the Day 1 map, where Neil and Ruth came through to win in the chasing start. Well done to WEGO to run the event: I counted only about 7 officials in all, between mappers, planners, controllers, organisers and helpers.
Running these events must have seemed a doddle this year- after all, the area is only maybe 30 km from Galway and not on an island (like Inishbofin) or three hours drive away (like Lough Eske in Donegal, where they ran the event in 2010).  The organisers had three new maps on waterproof paper, they bussed runners from Oughterard to the event as there was no parking at the area, and had prizes for the winners,  all for a lot less than the cost of an IOC entry. Frank Ryan and WEGO are set to run the 2013 Irish Championships near Lough Eske at the beginning of May. It should be good!
Results are here. Routegadget is on the IOA web site here. Photos by Roger Duff are here. (PS Thanks to the good Samaritan who rescued my running shoes from the event car park after I drove away on Saturday evening!)

Still no news as we go to press (as they used to say) of the World Championships team selection. The selection races were held at the Jubilee 5 events in Scotland which took many Elites away from the 3-Day in Galway. Nick Simonin and Roz Hussey were the fastest two Irish in both the Sprint and the Long races (Nick finishing 2nd overall in the Sprint). And the Long was long: 15.4 km with 650 metres climb for the men, with a winning time of 98 minutes. Ciara Largey and Nick were the best in the Middle Distance.
Controversy surrounded the Sprint race where a zig-zag final few controls and a thick purple line on the map lured some competitors into running from control 22 to 25 and to the finish (see the map section on the Senior Squad blog here). Some competitors finished, then realised, and went back out to get the controls in the right order. This is apparently allowed under BOF rules as long as you haven't downloaded, but it is not allowed under IOF rules.
See all the details, results and routes here.


VHI Selection: W40 needed!
The Irish team for the Veteran Home International team to take on England, Scotland and (especially) Wales on June 16/17 in the Mournes has been announced. This event has traditionally been in October or November on the bleakest, most windswept areas, so maybe it will be a change for the better to have ferns, ticks and midges instead! The events at Tollymore and Meelmore are tied in with LVO's O-Festival and there's a street event on a new map of Newcastle on Friday evening, a barbecue and a lovely meadow to camp in at Tollymore
The team is:


Summer Series ends
The CNOC summer series ends on Tuesday 19th June with the barbecue at Hollywood, Co. Wicklow and a score event beside the village. Details on the IOA web site. However, you can still pick up some summer and autumn events locally: 3ROC are running four Tuesday evening events in Dublin's Phoenix Park in August (7th, 14th, 21st and 28th), and Fingal's now established "Scatter" series is on four Sundays in September. 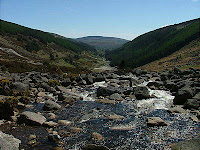 Apart from being the home of much Leinster orienteering, County Wicklow plays host to a number of other similar activities. Coming up is the 15th Setanta Rogaine on June 23/24, with a 6 hour event starting at 8 am on Sunday and a 24 hour event at 2 pm on Saturday. Both races use the Harvey's Wicklow map. Details here.

Wicklow Way Relay - Runners from CorkO, Ajax, Setanta, Fingal and other orienteering clubs took on athletics clubs and adventure racers in the IMRA Wicklow Way Relay on 26th May. The race, from Marlay Park in Dublin to Shillelagh in south Wicklow, covers 127 km of forest and mountain trails. It was a perfect day for the run, warm, dry and sunny with a pleasant breeze,  and Rathfarnham emerged the clear winners in a time of 7 hours 9 minutes 52 seconds, with a close finish for 2nd and 3rd (8.02.25 and 8.02.57). Full results here. The top orienteering team was "CorkO & Co" in 6th place in 8.31.29.

Wicklow Round - Fermanagh Orienteers' Billy Reed, running with Greg Byrne and Finbar McGurren, completed the Wicklow Round on the June Bank Holiday weekend in 20 hours 56 minutes on his first attempt. This is a truly outstanding achievement, writes Gordon Stephens - the Wicklow Round is the Irish equivalent of the Bob Graham round in the Lake district: 26 peaks, more than 100 km with 6000 metres climb in under 24 hours. See the IMRA web site here for background info.

Several Irish orienteers will be running in Finland's Jukola overnight relay on 16th/17th June. The biggest Jukola ever has attracted 1654 seven-person teams for the Jukola relay and 1245 four-person teams for the Women's Venla Relay which precedes it: that's a staggering 16,500 or so runners! The competition is at Vantaa, outside Helsinki, only 10 km from the airport. Watch it live through the night on the Jukola web site here.

Belfast will host the next World Police and Fire Games from 1 - 10 August 2013,  attracting 25,000 visitors from over 70 countries.
This will include an estimated 10,000 competitors competing in around 65 sports, plus 15,000 friends and family.  Currently the programme includes cross country running, mountain running, track and field, a stair race (!) and, yes, orienteering!
The Games represent an amazing opportunity to raise Belfast’s profile internationally and leave a lasting legacy for Northern Ireland. It is estimated that it will inject at least £15.5m into the local economy. Details here.

What's in a name (1)? Two events on the same day at different "Curraghs"? The IOA Fixtures List has two events on June 13th, one at Curragh Wood, Midleton, Co. Cork and one at Curragh East, Co. Kildare.This brings to mind the story of the family in the UK navigating to an O-event using grid references but unable to find it. In desperation they checked all their details and found thay had been navigating to the organiser's telephone number!
What's in a name (2) Some of the areas we use for orienteering have beautiful names, particularly in Irish. I was taken with the recent Galway 3-Day areas, but when I was at school "Sruth an Iolra" would have meant "Stream of the Plural", not the "Stream of the Eagle" ...
25 Years ago ... the CISM World Military Orienteering Championships were held in Ireland. Pat Healy and his crew made new maps in Wicklow, or amalgamated and updated existing maps, to make the CISM maps around Glendalough, Cronybyrne and Devil's Glen: these maps then led to the ill-fated 1988 Continental Cup being run here (none of the "Continental" teams took part). In a sign of the times, the CISM Orienteering Championships were on in Denmark this month but no Irish army team took part - presumably due to government cutbacks.
(A story from CISM 1987, possibly apocryphal: A Scandinavian runner falls and injures his arm. The Army ambulance comes to take him for treatment and the paramedics decide the arm should be splinted, but there is no suitable splint available. What to do? The paramedic sees a machete in the ambulance and gets ready to use it. The runner sees this and pales as he says "Surely that is too drastic? It is only fractured...".)


Finally, if you're going to any interesting events over the summer, please write about them for TIO!

Posted by John McCullough at 20:42