Well done, David, Niamh, Nick and the rest of the Irish team in Norway. For the first time we had qualifiers in every distance: Nick Simonin in the Sprint and the Long, David Healy in the Middle and Niamh O'Boyle in the long. The first 15 from each of three parallel heats went through to the final in each distance. Niamh, her brother Seamus, and Ciara Largey were among those to miss qualification by a matter of seconds in some of the heats. David Healy finished 43rd in the Middle Distance final, Nick was 41st in the Sprint final (2 mins 20 seconds down on winner Matthias Mueller) and 40th in the Long, and Niamh was 34th in the Long distance final race.
You can read about the Irish performances at the World Championships in Trondheim, Norway, on the excellent Irish Team blog here, with reports from all the races by the team members themselves. Full results, maps, photos etc are here.
The atmosphere in Trondheim was electric, with runners and supporters on the edge of their seats waiting to see who would qualify for the finals. The competition at this level is intense, and the shorter the distance the more severely a mistake of a couple of seconds is punished.
Trondheim, Norway's third city, was out in fete to celebrate the WOC: banners on the streets, newspapers in the shops, a big stage in the town square for concerts and prizegiving. There were almost 2000 other runners there too, taking part in the WOC Tour, a series of five events run on the WOC areas at sprint, middle and long distance. This group included many of the Irish Junior Squad on a training trip - and they learned a lot about orienteering both from running in the fantastic Norwegian forests and from watching the world's elite orienteers in action.

Aonghus O'Cléirigh's advice was to keep your feet wet, in other words to use the marshes to run in, and there were few enough other linear features out there to use. The natural pine forests were a delight and the WOC Tour courses were testing and fitted in well with the WOC programme itself, allowing us to run and watch.
The best Irish WOC Tour performance was Ruth Lynam (2nd W55).

We should also mention the three members of the Irish Trail-Orienteering team, Alan Gartside, Wilbert Hollinger and Gordon Stephens, all from LVO, who were on their way from the European Trail-O Championships in Sweden. Wilbert was the highest placed of the three.

Finally, no account of the Trondheim WOC would be complete without a special mention for the "extra man" on the Irish team: Mike Long and family. Mike and Catherine, Róisín and Ruairi made their house in Trondheim a base for the Irish team before and during the competition, with a series of Elite runners staying there and training over the summer.  Not only that, but they provided floor space, bikes, local information and transport so that the team and supporters really felt at home.

Ivan Millar adds: David Healy gives a fascinating insight into the big race thought- processes in his World champs middle distance report.
You can read his view of the race on the Irish WOC blog now.


Northern Ireland Championships Weekend
In a move from tradition, the Northern Irieland Championships were run in June rather than September, and the weekend - based at Tollymore forest park in the Mournes - also included a night mass start race (won by M16 Jack Millar), a barbecue, overnight campsite, a Temp-O event, a bearing and pacing challenge, technical training on the Sunday and orienteering fun and games for the kids, all hosted by Lagan Valley Orienteers who simultaneously ran a micr-O event in Belfast for the official opening of the Decathlon store. On top of all this, LVO managed to have more than 80 entrants in the NIOC - some going!
Steven Linton (NWOC) took the Men's title and Sharon Lucey (FermO) the Women's.


French 3-Day
A small party of Irish runners made it to Besancon in Eastern France for the 3 Jours de Franche Comté: a sprint in Besanconn on Friday evening was fast and not too technical, the courses starting at Vauban's UNESCO listed Citadel fortress and dropping to the town below, passing through a 400 metre long tunnel with a canal. The Saturday race was full length, in runnable limestone forest with lots of depressions, and the Sunday was similar. Luckily the temperatute had dropped from 38C just before the event so running conditions were just right. About 800 runners took part, mostly from France. The event was only about 100 km from the World Masters in Switzerland a few days later but I didn't see much evidence of overlap between the events. Next year's World Championships are not far away (further south, at Chambéry, in August).


Lakeland 5-Day
I hope to get a report on this one soon, but as I write it's just finished. Rain meant the cancellation of one of the days because of the possibility of pollution from the parking field to a reservoir nearby. (The organisers have appropriately affered to pass on unclaimed refunds to the Pakistan flood appeal). A quick run through the results shows Niamh Corbett 3rd W16, Anne May (former Irish Orienteers secretary) 1st W60S, Anne Donnell 1st W75, an Enniskillen native if I'm not mistaken; Cillín Corbett 5th M18L, Shane Lynch 5th M21L, Declan McGrellis 3rd M35L, James Logue 1st M40L, Brian Corbett 2nd M50L. The event website is here.
Next year's 6-Day is at Oban in Scotland starting on July 31st. Details here.


Autumn preview
The Fingal scatter events are among those to kickstart the new season - these are like score events but without a time limit, where you have to get a certain number of controls in any order (also called Spanish Scpore events, if I'm not mistaken). Apart from this, the annual Mournes Mountain Marathon is on 18-19th September (details here). Full fixtures list here, though there are more events still to go on the list. Cork and Kerry clubs are also staging series of beginners events in the autumn. 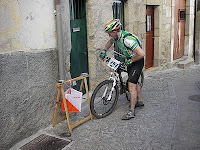 Good to see two mountain bike orienteering events scheduled: Setanta Orienteers have one at Castletimon (near Brittas Bay, Co. Wicklow) on September 19th and one at Djouce Woods, again in Wicklow, on September 26th.

JHI 2009
Congratulations to the Juniors selected to run in the Junior Home International at Perth in Scotland on September 11/12th:


Event cancelled
The NIOA series Woodburn event on Sunday September 5th has been cancelled due to an infection of p.ramorum in the Japanese larch trees. This is the same fungal infection that causes sudden oak death in the USA and it has been identified in three forests in south Antr
Istanbul 5-Days information

IOG (Istanbul Orienteering Group) invites you to the 7th "Istanbul 5 days" Orienteering Event which will be held in and around Istanbul, Turkey on 2-7 November 2010.
This is a multiday O-event taking place in two continents (Europe and Asia); in various parks, forests and even in the maze-style streets of the huge and ancient Grand Bazaar in Istanbul. The middle distance race on November 6 will be a WRE (World Ranking Event), while other days host sprint, long and classic distance races.
Since 2004, IOG has been organizing the Istanbul 5 days and have enjoyed a high level of participation from different countries. Last year 1028 competitors from 32 different countries participated to the event and returned home (with their words) “I don’t regret a second ;) Good organization and nice competitions” . According to a participant, Jan Kocbach of WorldofO, “The Grand Bazar orienteering is one of the things all orienteers should have on their “Must-have-once-in-a-lifetime list”
On the website www.ist5days.com, you can find all the information about the event, accommodation possibilities in the centre of the old town, transportation, participation fees and more. Bulletin 2 is already released and Bulletin 3 is coming soon, while you can also register online for the event.
For more information : http://www.ist5days.com/

That's all for now!
Posted by John McCullough at 10:18