Multi-Irish champion Niamh O'Boyle is not afraid of a challenge! 2010 has seen her not only finishing off her PhD, this summer she has also taken on the challenge of orienteering her way across Scandinavia against some of the best orienteers, most testing terrain and thirstiest mozzies you could ever meet!

Thanks to Niamh for permission to reproduce this here:

Leaving for Trondheim
I was due to leave for Trondheim, where Mike (Long) and Catherine had generously offered accommodation, on Thursday 10th June. On Monday, June 7th I ran in the Flora Women’s mini-marathon, running a new 10km PB of 39:18 and more importantly, raising €1000 for Barretstown Gang Camp, an amazing association near where I live that works with seriously ill children and their families. On Tuesday, 8th June I managed to submit my PhD thesis, 466 pages of anti-cancer drug-related research. I was unsure until the very last few days whether I would be able to submit it before I left, or if I would have to wait until I returned, but it was in! No time to think about it – had to start packing and before I knew what was happening, I was on my way to Norway with a bag full of orienteering kit. I had some ill-effects from the 10km – a sore underfoot – but a trip to the physio (my long-suffering physio, Aidan Woods on Pearse Street – he’s great!) assured me that it was nothing serious and a few days rest would be fine…

The Trondheim Open
Arriving on the Thursday, myself and my brother Seamus had about 18 hours to settle in before our first competition. The Trondheim Open was held over 3 days and to be honest, I was still in a bit of a daze for the whole thing (this daze was to last a while…!). My foot was still a little sore, but improving daily and I couldn’t resist the enticement of a 3-day orienteering event. A sprint on Friday was fun (map below), with a middle distance on Saturday and a longer distance chasing start on Sunday. The maps for the middle and long are available here with GPS tracking, though I wasn’t wearing one. In the middle distance, I was doing well until number 9, where I dropped 3 minutes. Ditto for the longer course on Sunday, where I dropped 5 minutes on number 8 with a horrible error leaving number 7 the wrong way. Lessons learned and wasn’t worried at this stage of the summer at all. It was just wonderful to be back out orienteering!

The Nordic Orienteering Tour
This was a new concept in the World Cup for 2010. I won’t go into it in too much detail but basically it is aimed at raising the profile of orienteering by increasing coverage, etc. The bit that mattered for the athletes was that it incorporated 3 races in 3 countries over a 10-day period, coinciding with major races like Jukola and O-Festivalen. It was an interesting idea and an Irish team of myself and 5 males were to compete in it. The first race was in Finland. It was a mixed middle distance-sprint distance race, and the middle part was a disaster. It has been a long time since I made such a silly error, and I can’t even figure out a reason for it. I was running along the high bank from 13 – 14 when I saw some huts, and try as I might, I could NOT locate them on the map (of course they were there!). I was thrown by this and took way too long to relocate. Rusty map skills… The positive that I took out of the race was that I got over it well and completed the sprint part with no hiccups, and was in 33rd place for the sprint part of the race. Map and GPS tracking.

After this, it was time for Venla and Jukola. Unfortunately I was picking up a cold, which got way worse after my Venla run. Not good for stage 2 of the Nordic Tour, which was being held 3 days later in Stockholm. It was nearly gone by then, and I managed a good, consistent sprint race to finish 44th. Unfortunately it wasn’t fast enough to qualify for the next round (top 30 – was 45 seconds down on qualifying). The sprint finals were held in Gamla Stan (The Old Town) in Stockholm. The final leg of the tour was in Norway at O-festivalen. Another sprint race, not part of the World Cup series, was held on Friday and the World Cup chasing start on Saturday. The terrain was rocky and tough, and I didn’t see anyone out there, so it felt very alone. After all this, I was really looking forward to going back to Trondheim!

The Nordic Tour was fun, but for me it came at the wrong time. In hindsight, I hadn’t done enough orienteering prior to it and would have benefited far more from staying in Trondheim and recovering from the craziness of the month before I left, with writing up and my 10km road race. The Nordic tour involved a lot of travelling, and I can understand why a lot of orienteers chose not to include these races in their schedules for 2010. It also ended up being quite expensive, and if it were not for the hospitality of Andrew in Stockholm, would have been even more so. I don’t think this Tour will be an event that I’ll be aiming for in the next few years. Having said that, it was fun travelling and staying with the Irish team.

The Irish selection races, Verdal
There was a one-week gap between the end of the Nordic Tour and the start of the Irish Selection races. During this time, most of the Irish team travelled up to Trondheim to get in some terrain work. It was a great week of team bonding! And it was fantastic to see so many of the guys going for the team. The only disappointment was the number of girls – only myself and Ciara made the trip, and we were staying in Trondheim anyway for the summer. This was good in one way, as the top 2 were guaranteed selection! Because of this, there was no need to taper and I could train hard in the week before the races. However, increased competition can only be a good thing and hopefully in the future, when some juniors start coming through, competition for the women’s team will be just as intense as the men’s.

The races themselves were fun. The sprint on Friday was fast and furious, and not very technical, mostly based on route choice (which way would you go? – see the course at this link. I was most pleased with my middle race. In the races since arriving in Scandinavia, I had been making unacceptable big mistakes, so the aim for this weekend was to forget about the pace I was running at and get around without any major mistakes. I managed to do this in the middle distance and only had a small loss of time, managing to beat some of the Swedish girls who were using it as their WOC selection race too. In the long on Sunday, I didn’t stick to this plan and lost a lot of time on number 3, and some more time with not being aggressive enough.
Routegadget middle distance
Routegadget long distance
In the guys, Andrew won the middle selection and Nick won the long. The Irish WOC team was selected shortly afterwards and is the largest team to be sent for many years. 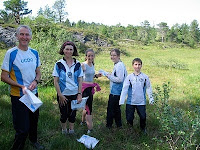 And so, to summarise!
The trip has been a little crazy in terms of travelling around, so that’s something I’d like to reduce when preparing for a big event in the future. After the Irish selection races, I had a bit of time to breathe. I did some travelling with Hugh in the western fjords, including a hike on a glacier, incredible. I’ve been doing some training in the Trondheim area and getting some runs in too. It’s time for the 2 big aims of 2010: the World University Champs and the World Champs. I’m down in Borlänge in Sweden for the World University Champs, and unfortunately as I write this, the long distance is in progress. Food poisoning hit me three days ago, and although I’m recovered, I decided last night not to run the long distance. It was a really tough decision to make, but definitely the right one. Even if I could get around the long, I’m not here just to get around – I want to do well. Getting around the long and risking the possibility of wiping myself out again for the sprint and middle (Wednesday and Thursday) would have been silly. I learned my lesson at Venla that I shouldn’t run whilst not feeling well. So as hard as it is to sit out the long distance, I can go into competition tomorrow knowing that I’m fully fit and ready to go. Looking forward to it!

There will be blog updates about how myself, Nick and Colm are getting on here in Borlänge and also from the World Champs. After the World Champs in Trondheim, where I’m running the sprint, long and relay, I’ll let you all know my own take on the competition phase of my summer. A big thanks to Mike, Catherine, Ruairi, Roisin, Murray, Aidan, Jim, Ivan, Ruchika, Hugh and the O’Boyle clan who have all helped me immensely along the way. Till then, happy orienteering!
Posted by John McCullough at 16:24