Get ready for the JK …

The Northern Ireland Orienteering Association has announced that they will be hosting the 2011 Jan Kjellstrom international orienteering festival. The “JK”, as it is known, is the premier multi-day orienteering competition run under the auspices of BOF, the British Orienteering Federation.

Jan Kjellstrom was a young Swedish orienteer who came to in the 1960’s and helped establish the sport there. He was tragically killed in a car accident in 1967 and the first JK was run later that year in his memory. Nowadays the event can attract 3000 competitors.

The JK features four days of orienteering: a two-day individual on Saturday and Sunday, a Relay on Monday, and another event on the Friday, which in 2008 will be a sprint race.

The NIOA are no strangers to running major events: the Junior, Senior and Veteran Home Internationals and the Irish and British Championships have all been run in , but this will be the biggest in terms of numbers.

Just as the 2012 Olympics is expected to have a positive spin-off effect for , JK2011 will have a major impact on raising the profile of orienteering on the whole island.

The NIOA is smaller than lots of orienteering clubs in other countries and this is a huge undertaking. The IOA plans to cooperate with NIOA to organise a series of complementary events to make the whole ”Irish Orienteering” experience a successful one. Hopefully, just as the fire engines from , Drogheda and Dundalk raced to help when was burning after a German air raid on 16th April 1941, orienteers all over the island will be happy to lend a hand when the time comes for the JK, 70 years later almost to the day.

A meeting of interested volunteers will take place in Dungannon Rugby Club, Co, Tyrone, on 13th February. The event co-ordinator is Harold White.

Cork Orienteers have started taking entries for the Irish Championships at the beginning of May. Entries are being accepted online for the three day competition on May 3-4-5 on in .

has been used for the Shamrock O-Ringen in the past, the detailed open mountainside with spectacular sea views providing fast running with challenging navigation.

The plan for the weekend is to have the Classic race (normal distance) on the Saturday, Relay on the Sunday and Middle Distance on the Bank Holiday Monday. This will probably mean travelling down on the Friday for most people. Unlike Inisbofin, is only a short hop from the mainland, so staying in Castletownbere or thereabouts should be possible. 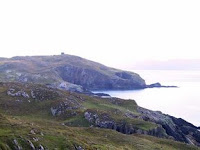 Posted by John McCullough at 11:57

Where have all the logos gone? The NIOA and Cork O emblems were there when I previewed this piece ...