Mary Healy attended a planning course in the UK. Here she reports on the experience ...


A WEEK IN AN ORIENTEERING BOOTCAMP

If anyone had told me that a week of sleeping in a dormitory and working from 8.30 am till maybe 11 pm at night, with sometimes only 15 minutes for lunch, could be exhilarating fun, I’d have said ‘Yeh, Right!’. But that’s what it was.

With a last minute invitation from the IOA to go on a Planners’ course, I found myself on a Monday morning in June on a Heathrow-bound plane, on my way , where the British Army Orienteering Club (BAOC) hold courses in both course planning and orienteering skills. Every three months, they gather their handpicked team of experienced instructors from all over , to run these courses for British army orienteers. In recent years, our army has also been invited to participate but last July was the first time the IOA were invited. The IOA were offered one place on the Planners course and one on the Orienteering Skills course. The notice was extremely short though and the IOA had to find people who could take a week off immediately. Niall Ewen (Ajax & Irish Junior Squad) and I were available and lucky enough to be able to take up these places.

From the minute we reached the centre, all outside life ceased to exist. Our time was scheduled from dawn to bed. I can only speak for my own course content, as I was too busy to have any chance to check out Niall’s course, other than seeing that he’d made friends. And he made plenty of them. The camaraderie between participants was huge, the philosophy being – ‘We all muck in together and get the job done!’
On my Planners course, as I had expected, every ‘i’ was dotted and every ‘t’ crossed. Nothing was left to your interpretation. Everything was spelt out and no stone left unturned in itemising every detail of a Planner’s role in staging an orienteering event. We were treated to 17 lectures in 4 days, from Monday lunchtime to Friday lunchtime! AND we had practical exercises out in the forest. AND we had Homework (!) every evening. Luckily, we got PowerPoint handouts on everything, so we weren’t on overdrive from note-taking and could just listen and absorb instead.
Lectures were on everything from Technical Difficulty to Choosing Legs and even a whole lecture on Taping! Now, what would you think should be included on Taping? If you thought of it, it’s there, e.g. ‘Do not write in Red on Red tape.’ What’s more, we then did a practical exercise on it! Out we went into the forest, literally on our doorstep, armed with our roll of electrical insulation tape, a map with control sites and instructions to check sites already taped. Another day, we got to tape our own newly planned courses and then – With-A-Different-Colour-Tape – check someone else’s taping.
We even got a lesson on OCAD, the computer program used to draw orienteering maps and courses, in one of four lectures one morning. To be honest, this was about the only weakness of the course. You could give a whole course just on OCAD alone. Half an hour on it just wasn’t enough for people who never experienced it, who were then expected to use it to draw up courses. Most struggled with it. This was the first time OCAD was included on the course. To be fair, they want to give a complete and comprehensive course on Planning, with everything that needs to be covered included in it. It’s up to the participants to go away and work on the content. They could lengthen the course duration, but it’s not realistic to expect people to give more than a week to such a course. So, in retrospect, it is better to have a rushed introduction to OCAD than none at all. 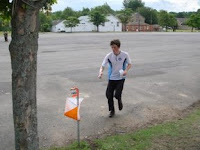 It wasn’t all slog though. We got out into the forest, on average, three times a day, on practical exercises of 30-60 minutes, which were a welcome stretch and freshened us up for the next session. One such exercise was a Sprint race, where all 50 or so, from both courses, went off at 1 minute intervals, around the centre’s many buildings and woods. Excellent fun! 60% were caught out on their way to No 1 - they didn’t notice the uncrossable fence on the map, until they were almost within reach of the control. I was just about to punch, when one guy approached the fence and called me. I thought “What am I going to do, if he asks me to punch his emit (electronic punch) card for him?” It was OK though - he just asked if that was the first control. Whew! Anxiety over!
Homework consisted of planning courses and drawing them with control descriptions up beautifully on OCAD. Now, at 5.30 pm, when you’re finished lectures, the last thing you want to do is spend much time on your homework. But each evening after dinner we returned, like dutiful students, to the classroom. Some were quicker than others. Whizz, whizz – courses planned. Others, like me, could be likened to a good whiskey, which improves with time. So we mulled over our courses a lot longer. Hence, by the time we finished, we were leaving at 11-11.30 pm! All hope of a nightcap in the bar was forgotten, as we fell straight into our beds, to recover in time for class at 8.30 next morning. The one time I did succumb to a bit of leisure time before bed, I was up and at my desk at 7.00 am, to get things done!
In a conversation with Colin Dickson, the Course Co-ordinator, an M50 and many times British Champion, he told me that the course centre was chosen for all the necessary onsite facilities it offered – quiet location; permanent orienteering building - with classrooms, computer room with OCAD 9 installed on all seven PCs, toilets, kitchen, equipment room; accommodation dormitories; restaurant providing full board – food was excellent to my mind; bar with TV. We didn’t ever need to leave the place. Although, the last night, we all went to the local pub instead, for a meal out, which was a good social end to a hard week’s work.
So, if any of you are offered the opportunity by the IOA to go on another one of these BAOC courses – Planner or Orienteering Skills – I say “Go for it!” It’s a brilliant opportunity. Top class instructors, who couldn’t do enough for anyone, all necessary facilities provided, packed but excellent course content. Be warned – it’s intense, it’s demanding, but it’s extremely rewarding and well worth doing. Essential, I’d say, if you aspire to being as fully qualified as you can be, to get the job done right.
But don’t forget your sleeping bag, unless you want to sleep under the grey hairy blankets that were provided, like Niall and I had to do, instead of all the snug-looking sleeping bags everyone else knew to bring!

Posted by John McCullough at 16:33