Turb-O at the Shamrock
With the locals outnumbered two to one by the visitors, it was going to be difficult to get podium places, but LVO's Áine McCann took the W21 Elite title. Erik Ivarsson Sandberg from Sweden won M21E with Bishopstown's Nick Simonin second.
The first day of this year's Shamrock O-Ringen in Kerry brought the competitors 10 km along forest roads to an unlikely location, a surreal, post-apocalyptic James Bondian moonscape of huge wind turbines on the top of a mountain in an area formerly known to orienteers as the Black Lakes. The 30-minute drive along the construction road to Inchincoosh Wind Farm in the Derrynasaggart Mountains allowed both young and old to enjoy the challenge of the area without the long hike we used to be faced with. The slow "whoosh, whoosh" of the rotating turbine blades sounded like approaching aircraft as the runners went to the starts - the three leaves of the shamrock replaced by the vanes of the wind turbines?
At the beep we entered the Minus 3 bogs, then the Minus 2 bogs, then the Minus one bogs ... then ran out into the real bogs! The revised map has had a lot of features removed (most of the form lines and crags, for example), leading to an uncluttered look but a lack of the expected detail. This change received some adverse comments from competitors as the area seemed undermapped. The terrain was typical Shamrock, with not a tree in sight, and plenty of marsh and some remaining contours. Experience has shown that it is difficult to recover from a bad run on the first day's middle distance courses, so a careful approach can pay off until you get the feel of the maps and terrain.
The event centre at Killarney racecourse and Ross golf course was the focus of the evening's activities, with the usual dissection of the winners' routes and thought processes with the aid of Routegadget. A table quiz followed, raising funds for the Irish Junior Squad. The event campsite was also at the racecourse, which was fine until the tractor started to cut the grass at 5.30 the next morning!
The second day featured a classic distance race at Crohane Mountain, an area used for previous Shamrocks and the 1998 World Cup. Again, the terrain was open mountain with lots of tussocky marsh. Weather conditions were ideal - dry and mild with a light breeze - and kept the midges at bay. Runnability on the first two days was not great because of the marshes and tussocks.
Back at the event centre the Shamrock Sessions followed a barbecue and, as well as the winners' routes, we had interesting presentations from NIOA Development Officer Helen Baxter on introducing orienteering to non-orienteers, a theme visited also by Paul Mahon who has extensive experience in organising adventure races. We had presentations on mapping by Laurence Quinn and P-O Derebrant and on sprint orienteering by Nick Barrable, plus a potted history of Irish orienteering as recorded in The Irish Orienteer by myself. A "strategy session" with club representatives meeting IOA Chair Mary O'Connell earlier in the evening identified issues the clubs felt should be dealt with by IOA, particularly things like growing the sport.  Another sound night's sleep after 3 am when the last of the celebrating golfers went home after the Captain's Prize ...
Day 3 was a chasing start, as usual. The course leaders started at 10.00 with your start time determined by your time behind the leaders after the first two days, so the first across the line is the winner. Crohane Lake provided a big contrast, with the first half of the courses on the open mountain (though a bit drier and more runnable than the first two areas) and a dramatic transition to some very varied forest for the second half. The forest was described by the organisers as "unique" and was something of an acquired taste: it was challenging and its low visibility was an invitation to make mistakes approaching the finish. One competitor remarked that on the third day we had the best orienteering of the weekend followed by the worst!
A difficulty with complex areas like these is in planning suitable easy courses for kids or beginners, and this was a feature of the weekend. Some of the Shamrock Session presentations touched on introducing the sport to beginners and making it fun and attractive - and it is gradually dawning on me that the Shamrock isn't for everyone. For those who like it, the Shamrock is a great weekend of varied and challenging orienteering. The contrasts between the isolated windfarm, the marshy open mountain and the tricky forest provided variety and the usual Shamrock combination of informality and efficiency made for a superb weekend's orienteering.

What are the attractions for visitors of this kind of terrain? One Swedish orienteer (a regular visitor) told me that in Sweden you can get lost for 3 or 4 minutes before relocating; in this terrain it can be 30 or 40 minutes. That's what he likes about it!

See the final results here. The maps and routes for Day 1 are here, for Day 2 here and Day 3 here. The Shamrock website is here.

Read Nick Simonin's account of the event here. Martin Flynn's excellent photos (including the two above) are here.


Coming up over the summer ...
The closing date for the Setanta Rogaine in Wicklow on June 22/23 is Thursday June 20th. The Rogaine has two classes: 6 hours and 24 hours. It's a long-distance score event where you visit as many controls as you can in the time allowed. Individuals and teams are allowed in the 6 hour class but the 24 hour is for teams only. Details here.

Summer series events: CorkO's series of evening summer events in the Cork area continues on Tuesday evenings up to July 23rd. Start times 5.30 to 7 pm. Details on the CorkO web site here. CNOC's summer Tuesday evening events in Kildare and Wicklow finish up with the Hollywood event and barbecue on June 18th. Details here. Lagan Valley are running the Tollymore Festival of Orienteering: three events on the weekend of June 21/22/23, starting with an urban sprint at Newcastle, Co. Down on Friday evening, a competition at Tollymore on Saturday and a score event at Donard on Sunday. Camping at Tollymore and a barbecue are part of the package. Details here.

For those of you who missed the Shamrock Sessions, here is the final slide of the Irish Orienteer presentation, bringing you right up to the minute ... 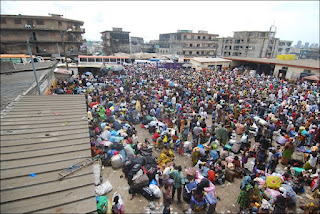 Killarney racecourse was a sea of colour today as orienteers waited anxiously for standby places at the Shamrock Sessions. The 400-odd runners jostled for pole position before the doors opened and several W10's were trampled in the rush when organiser Danny O'Hare turned the great rusty key to admit the crowd.
The anticipation soon turned to boredom, however, when the Irish Orienteer editor of more than 30 years droned on interminably about the technological changes affecting magazine publishing in that period, and the room was soon filled with snoring as the exhausted runners tried to catch up on much needed sleep in the light of the next day's races.

(Incidentally, the archive material which formed the basis for the talk, is on the IOA web site here - Ed.)