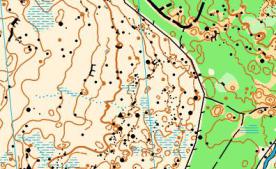 The rotation of the Irish Championships between the four provinces brings this year's IOC back to Connacht, with three new adjoining areas south of Oughterard in Co. Galway. Pat Healy's new maps, using LIDAR data, capture the detail of the terrain which is described as complex but runnable, undulating open with some young forest. It is reportedly more runnable than the areas used for last year's Irish 3-Day in the same general area.
Marcus Pinker will try to retain his Irish Classic title, missing the British Championships which are on the same weekend to run in Galway, but Darren Burke, last year's Middle Distance Champion, is also running well. Shane Lynch, winner of the recent sprint selection race for the 2013 World Championships, and experienced on open mountain terrain, could have a strong run, and Neil Dobbs has come home for the Championships, so it's hard to call.
Maeve O'Grady, winner of the Classic race last year, won't be defending her title. Ros Hussey, 2012 Middle Distance Champion, will be in the mix, with sprint specialist Susan Lambe, junior Niamh Corbett and previous winners Niamh O'Boyle and Ruth Lynam.
The Irish Championships are qualification races for all the International teams so interest will be high among all the elites.
Saturday will see the Middle distance race, with later afternoon starts; on Sunday it's the Classic long distance race and on Monday the Relay.
Follow the action on the IOC web site here.

Leinster Championships
Fingal produced a fine Leinster Championships on the sand dunes at Cahore, Co. Wexford on April 14th, on what looked a rather unpromising area to start with. The dunes are long and narrow, with small paths running along their length, not unlike Dublin's Bull Island (in fact the similarity didn't end there, with wind farms inland at Cahore taking the place of golf courses on Bull Island). Without SportIdent the event would not have worked, but the courses criss-crossed the  dunes and provided plenty of challenge and confusion.
Strong winds and loose sand underfoot meant that there was a physical challenge too, despite the small amount of climb on the courses. Val Jones's 1:7500 Lidar-based map was clear but extremely detailed with small contour features, and was printed in two strips on the A3 sheet to fit it all in (some courses used a 1:5000 scale map). Within seconds of the start we found that, while the tracks looked enticing on the map, they were hard work when it came to running, and the dunes themselves could give better runnability.
Fingal Orienteers marked their 25th anniversary by staging the event, so well done!
Ger Butler, 2nd on the day to Darren Burke, took the Leinster M21 title and Niamh O'Boyle took the Leinster Ladies title, though third on the day behind Áine McCann and Niamh Corbett.
One of the most competitive classes was M50, with three former World Championships team members Aonghus OCléirigh, Brian Corbett and Colm O'Halloran slugging it out, to finish in that order.
Results are here.

Shamrock O-Ringen closing soon
Entries from twelve countries have already come in for the 18th Shamrock O-Ringen 3-Day in Kerry on the June Bank Holiday weekend. Word has spread about this event but Irish entries are still disappointingly low (less than half the total entry) and the entry so far is less than 150. The events are at The Black Lakes and Croghan Mountain, between Killarney and Kilgarvan, with the event centre at Killarney racecourse. These areas were used for Irish Championships and/or World Cup races and Shamrocks before and provide the high quality open mountain orienteering we have come to associate with the Shamrock.
The closing date is Friday 10th May. If you've been to the Shamrock before, you know what to expect, so enter now ... if you haven't been, enter now to experience it. You won't regret it! See the event details here.
As a warm-up, Kerry Orienteers are running a sprint event on the wonderful Ross Island, a short distance from the event centre on the Friday evening. 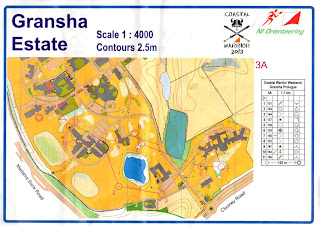 NWOC's Allan Bogle  took on quite a challenge to run sprint selection races at Gransha, on the outskirts of Derry, and a middle distance selection race at Magilligan on the weekend of April 27/28. The events were aimed at the Irish World Championships hopefuls but were open to others to run.
The format was a prologue with head to head sprint racing in the morning, to decide the starting order for the final in the afternoon. Gransha is a pleasant parkland area housing a hospital, used for a variety of sports (well known in cross-country running circles), but scarcely of the complexity which will be encountered in international sprint races. A small piece of forest added some tricky navigation in the final but the remainder of the area was less exciting.
Magilligan, on the other hand, is an excellent sand dune area used for the British Championships in 1992 and capable of sustaining any level of competition.
Numbers were disappointing: did the "Coastal Warrior" tag sound too much like an adventure race in Sligo or somewhere and put off the orienteers from coming?
The events served their purpose, however, with Shane Lynch and Niamh O'Boyle finishing first and earning themselves a place in the Sprint at the World Championships in Finland in July. No results yet for the Magilligan event on Sunday, but they should be here soon.

IOA AGM
Remember that the 2013 AGM of the IOA is on Sunday 5th May in Oughterard.
Recent changes and proposals about map registration and rules will be on the agenda so it's important that you are there to make your views known.
There will also be a meeting to reestablish the Munster Orienteering Council the same afternoon. Fingal's Tommy Burke made a plea on the Forum for a similar group to be reestablished in Leinster, to look after fixtures and the other things that need coordination. In fact it's a requirement of the IOA Constitution that the regional associations do this.

Am I all alone?
... but can we please have the old IOA web site back? The new version simply doesn't work for me ...

The old website is still working fine at http://orienteering.ie/builder.php3?Home. I hope no-one decides to take it down now!
Ruth