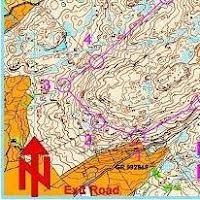 Donegal Three-Day
The area around Lough Eske in Co. Donegal is the venue for three exciting days of orienteering on the June Bank Holiday weekend. Mapped for the 2009 Irish Championships, the open mountain terrain resembles West Cork, with its marshes, crags and contours. The weather at the Irish Championships, particularly at the Relays, didn't showcase the areas as it might have, but hopefully this time Western Eagles OC's efforts will be seen in better conditions.

Details of the events are here.

Tollymore Orienteering Festival
The Northern Irish Championships are being held on Saturday 19th June at Tollymore Forest near Newcastle in Co. Down. Following on from last year's very successful, inaugural ‘Tollymore Festival of Orienteering’, LVO will be hosting a full programme of events on the weekend. Everyone is welcome to join in the weekend's activities.
The programme looks pretty much like this at present, with the facility in place to camp on either or both Friday and Saturday nights.
Saturday.
NI Championships – a full range of courses on offer.
String course – always a popular event for the young and the not so young. At the recent Slievenagore event, the competitive spirit of the elites could not be contained and multiple runs ensured the course time falling, quickly at first and then with some reluctance.
TempO  - Exercise the brain, even if your legs are tired – pit your wits against the fiendish Mr Gartside in a timed Trail O problem.
Evening barbecue and social event.
Prizegiving for LVO club champs and for NI Champs
Night orienteering. (10pm start)
Sunday.
Adult training session run by Helen Baxter
Junior Fun Day session run by Izabella Stefko - details here.
TempO – another puzzle to solve.
Entries are open here. Cheapest entries until 14th June. You can book your barbecue and camping along with the race entry, please make sure that you include for all in your party even if all are not entering the race. We don’t want to run out of food.
Everyone is welcome for what should be an excellent weekend of orienteering.
Gordon Stephens, LVO
Incidentally, if you're on for a spot of shopping, Decathlon, the giant sports supermarket chain, are opening in Belfast on June 17th, at the Holywood Exchange retail park, near the city airport and Ikea ... and LVO are running a Micro-O there on Saturday 26th June. 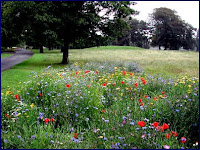 Belfast Parks
Another LVO venture in May is the Belfast Parks O-Week, a series of free races in Belfast's parks starting on Saturday 30th May in Ormeau Park after the Belfast Cliffhanger (see below).
The following events are on Monday 31st (Belmont), Tuesday June 1st (Woodvale Park), Wednesday 2nd (Barnetts Park), Thursday 3rd (Orangefied & Greenville), Friday 4th (Falls Park) and Saturday 5th (Musgrave Park).
The inaugural Belfast ‘Cliffhanger’ sprint race will take place in Ormeau Park in Belfast on Sunday 30th May from 1.00 to 3.00 pm. If you enjoyed the maze racing at Kilbroney Park on May 8th, you will find this even more fun! The event will consist of 2 prologue races with combined times used to determine A and B finals. If enough enter then there may be scope for semi-finals as well. Each course will pass twice through a specially constructed maze as well as through the more complex area of the park. Course lengths will be about 1.5 km, so everyone should get about 4.5 km if they stay for all 3 races. Start times will be deliberately close together and courses will be ‘gaffled’ to remove the temptation to follow other runners.
The event is the opener of the Belfast Parks Orienteering Week which is aimed at families and newcomers. Once the Cliffhanger is finished the maze will be available for all to try their luck and there will be simple courses in the park, so bring non-orienteering family and friends to watch you race and then to have a go themselves.
Summer Evening races
The Curragh-Naas OC (CNOC) Tuesday evening races continue with the Curragh (May 25th), Hill Wood, Monasterevin (June 1st), Curragh East (June 15th) and Hollywood, Co. Wicklow (June 22nd). In Munster, CorkO's Inter Firm league continues on Tuesdays with Currabinny (May 25), Moanbaun Wood, Watergrasshill (note change of venue from Fota) (June 1), Warrenscourt (June 8), Ballyannon (June 15), Tracton (June 22), Lackendarragh (June 29), Corrin Hill (July 6), James's Fort (July 13), Glenbower (July 20) and Ballincollig Regional Park West (July 27). Bishopstown's equivalent Business Houses league finishes up on May 27th at Corrin Hill. Full details in the Fixtures section of the IOA website. Evening mountain races are running at the moment too: Wednesday evenings - details here.

Jukola
The Jukola 7-person overnight relay takes place in southern Finland on 19th/20th June. Several Irish teams, or at least teams with Irish runners. have taken part in recent years but TIO isn't aware of any this year. If any of you are going to Jukola, (a) good luck and (b) please write about the event for us afterwards! More than 1500 teams have already entered for the relay and more than 1000 for the women's Venla 4-person relay  earlier in the day. Details of the events are here.
You should be able to follow it live on the internet - Jukola start time is probably about 11 pm local time (9 pm in Ireland).

Exam time
Best wishes to all our orienteering students doing Junior Cert, GCSE's, Leaving Cert, A-levels and college exams. Concentrate on the study for now, get the academic stuff out of the way then get stuck in to the orienteering again!

Leinster Champs Routegadget Fixed
The results and routegadget (route plotting program) for the Leinster Championships at Carlingford were hit by some computer problems, but these now seem to be fixed. You can out in your route from a GPS or using a mouse here. The organisers, 3ROC, apologise any inconvenience!
30th Anniversary Hill Race
On 22nd May the Irish Mountain Running Association (formerly "Hill Running") staged a race on Three Rock Mountain outside Dublin to mark the 30th anniversary of the first organise hill race to Fairy Castle back in 1980. Several orienteers (Peter Kernan, Tara Horan, Catherine Lyons, Joe & Caitlín Bent) ran in both the 1980 race and the 2010 "Fairy Chase". Photos, results and reports are here. Almost 120 runners took part. 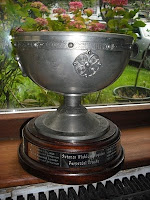 Setanta Rogaine entries open
Setanta Orienteers have opened online entries for their 13th Rogaine, a two-person score event in Wicklow, on the weekend of June 26-27. The event will have two categories, a 6-hour and a 24-hour. Details of the exact location are a closely guarded secret until just before the event, but you can get information and enter here. The event has been running since 1998 and offers a mountain-marathon type experience without having to carry all your kit for two days.
Rogaining started in Australia in the 1940's - the word reportedly is composed of the names of the three inventors, Rod Phillips, Gail Davis (née Phillips) and Neil Phillips. (It has also been defined as a "rugged outdoor group activity involving navigation and endurance", the initial letters of which also spell "rogaine"). [This activity should not be confused with the hair restorer "Rogaine", also sold as "Regaine"].


The new maps are in the same general style as their Dublin & North Wicklow Mountains Map published in 2009 and printed at 1:30,000 scale on 120 gsm Pretex paper which is water and tear resistant. Retail price is same at €9.95 per sheet. They have a value deal for people who wish to purchase a set of the three maps at €29.00. The maps should be available in Eason's, National Map Centre, Great Outdoors and shops in Wicklow in due course.
Barry Dalby writes "Fieldwork on foot and by bike was undertaken in 2009 (great autumn!!) and 2010 interrupted somewhat by snow & ice etc. I think we've done a pretty good job at capturing the forest, road, track and path detail as well other physical features. Contouring is still at 20 metres - not ideal, adequate in Wicklow for general hillwalking and biking. Hopefully we can improve with more contour detail in the future. As with any map, doubtless we have missed some features and/or new forest tracks have been constructed etc. As always, I appreciate any feedback on detail that appears to be missing or incorrect so that we can chase it up on the ground. Where there is a significant issue, I'll publish free .pdf updates on our website.


One aspect that I have invested a lot of time & effort into is a thorough review of the placenames of the hills and the location of 'heritage' features etc. This has been a substantial task in itself and of course, open to improvement. I have written some of my thoughts on this aspect which you can find here. In general I have deliberately chosen diversity as far as forms of names are concerned to reflect the richness of this aspect of our heritage. I have also placed an emphasis on the names known and used by the good people who live in the Wicklow hills rather than in some cases, those recorded on OSI material.
I trust you enjoy using these maps as much as we have enjoyed making them and I thank you for your support. I also hope that they'll go a little way towards a more complete record of these hills and valleys so close to many of our hearts.
Finally, I might mention that Wicklow Mountains East sheet will be published early next year. I will be also looking in more detail at releasing digital versions in due course as time allows. Thanks."
Barry Dalby
Eastwest Mapping,
Clonegal,
Enniscorthy,
Co.Wexford.
Ireland.
ph: 00353 (0)53 9377835
fax: 00353 (0)53 9377835
Quote of the month
"It is not the critic who counts: not the man who points out how the strong man stumbles or where the doer of deeds could have done better. The credit belongs to the man who is actually in the arena, whose face is marred by dust and sweat and blood, who strives valiantly, who errs and comes up short again and again, because there is no effort without error or shortcoming, but who knows the great enthusiasms, the great devotions, who spends himself for a worthy cause; who, at the best, knows, in the end, the triumph of high achievement, and who, at the worst, if he fails, at least he fails while daring greatly, so that his place shall never be with those cold and timid souls who knew neither victory nor defeat."

"Citizenship in a Republic", Theodore Roosevelt; Speech at the Sorbonne, Paris, April 23, 1910
Posted by John McCullough at 23:48