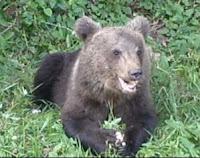 Marcus Geoghegan was one of a party of Irish orienteers who dared to go to Transylvania during the summer for a 3-Day ...

This is going to be easy. If I run as fast as I can and concentrate on the navigation then I should be able to make up for yesterday’s mistake and get into the chasing start on day three. After all, confusing a five metre deep erosion gulley for a small track is an easy mistake to make (it could happen to anyone), losing me seven minutes on a course that should have taken only thirty-five.

But today is going to be different. Except for the heat. Oh yes, the heat; thirty-three degrees and more. The incredibly steep climb to the start has left me soaked to the skin and dehydrated before I’ve even picked up my map. Our Transylvania 3-day event info recommends gaiters and full body cover, but yesterday’s forest was as close to orienteering perfection as you can get with open runnable forest, lots of contour detail, fast but tricky, so who’s going to bother with full body cover?

First control is a doddle, or at least it should be. All I have to do is run over to the *side* of that big hill, go around the little marshy bit and there I’ll find the control. So why do I run towards the *top* of the hill, ignoring that patch of wet-looking green vegetation lower down to my right? OK, put that stupidity behind you and concentrate on the second control. There’s a big patch of rough open to be crossed before re-entering the lovely white forest. Take it steady and use those tank tracks to guide you across the open area. We are in a part of the Romanian Apuseni mountains called the Poligon whose rusting mock trains and tanks betray the area’s previous incarnation as a soviet-era military training ground.

Back into the lovely white forest again. Next couple of controls are no problem. Fill up at the water station and then out again into the heat across some more rough open ground. Am beginning to realise why full-body cover was recommended - two inch hawthorn spikes can puncture an artery and, as Pat can testify, they’re not very pleasant when embedded in the top of your skull. Use small marsh as attack point for number five, all is going smoothly. Number six i 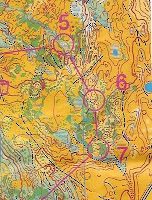 s a re-entrant about 150 metres from five. Navigate carefully. Blow it. Lost. Try to relocate off another marshy bit, control must be just over there. No, it isn’t. What’s that sound? Find a herd of goats in a nice shady copse avoiding the midday sun with the goat-herd enjoying some Euro-Techno on the radio. Beginning to get a blister but it’s only a small one, maybe the size of a 10 cent coin.

The best strategy now is to wander aimlessly for a few minutes, fooling myself into thinking that I know where I am. Find the techno-goats for the second time, desperately wondering which of the hundreds of blobs of green on the map is their nice shady copse. Beginning to get delirious in the sun, even with my indispensible French Foreign Legion hat and all of the water that I downed a few minutes ago.

Well, it’s only 150 metres back to the previous control so why not do the right thing and start the leg again? Cut your losses. Get half-way back to previous control, fool myself into thinking that I recognise where I am, repeat all of the mistakes that I made the first time and find the techno-goats yet again. Is that still the same tune? It all sounds the same to me. Repeat the “wander aimlessly” strategy but for some strange reason it still proves unsuccessful and includes a fourth visit to the techno-goats. Make “go back to previous control” decision again and get completely lost. “Oh for heaven’s sake!” (not exact words used), the two controls are only 150 metres apart!

Eventually find little marsh used as attack point for control five. Walk to number six. WALK, I said. DO NOT RUN. Anyway, running is becoming unpleasant as blister is now the size of a 20 cent coin.

Find number six at last. Funnily enough it’s in the exact place that it would have been in if I’d looked in the right place the first time around. That leg took me seventeen minutes, Dave did it in two. OK, put it behind you and start jogging to number seven. What’s that sound? So that’s where the techno-goats are, only a few ****ing metres from control six! I suspect that I’m now a worse navigator than Dizzy, our spatially disoriented car Satnav, who couldn’t find our hotel’s street and had to be saved from vehicular defenestration on a number of occasions.

Next few controls are OK, including something that is a first for me – orienteering through stables, the horses utterly indifferent to the sight of people running past their nice piles of lunch-hay.

Still a few more controls to get in the rough open, but soo

n will be back into that lovely white forest, with its grand-canyon gullies and clutter-free forest floor. Blister has now stabilised at €2, but dehydrated delirium prevents me from feeling the pain. Wonder if there are any bears in this forest? – we actually saw a European brown bear with her cub while we were driving over the Transylvanian Alps a couple of days ago; a real privilege.

Reach the finish after an epic 131 minutes, just in time to give a short Irish lesson to a Romanian orienteer who is doing a master’s degree in Irish Studies – it’s a small world. Brendan now knows why full-body cover was recommended; his choice of sleeveless t-shirt has left him looking like one of those self-flagellating monks from the DaVinci Code.

In the end “OK Paddy” wins three podium places with Mary O’Connell, Dave Weston and Hazel Thompson taking home some silverware (actually the prizes are vodka glasses). Deirdre O’Neill, Pat Ryan, Brendan O’Connor and I take home great memories of some complex, challenging and perfectly mapped orienteering terrain that is as good as it gets anywhere in the world.

Posted by John McCullough at 21:29