Orienteering by Franc: the Irish 3-Day 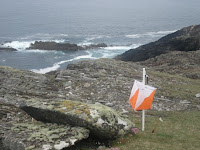 Forget Rome and the Bahamas: Inishbofin, off the west coast of Co. Galway, is the hottest spot around for weddings. Just try running an orienteering event on a weekend in June and finding accommodation for the runners and you'll see. I was told there were 70 weddings planned for the island this year, but the small organising team from Western Eagles and CNOC managed to squeeze maybe two hundred more people onto the island for the June Bank Holiday weekend, on top of the resident population of 180 or so.
As one runner from abroad said, if you wanted to design an open mountain orienteering area, Inishbofin is what you would come up with. It has crags, marshes, shape, everything you need, without being too steep to run, and the underfoot conditions are ideal - short grass and short heather.
The planner, Frank Ryan, made excellent use of the areas: the west end for a short race on Saturday evening, the central and northern part for the classic race on Sunday and the complex southern section including the tidal area around Cromwell's Barracks for the chasing start on the Bank Holiday Monday. A rather dubious control on the first evening and shifting numbers on some of Sunday's overprinted courses marred the event for some competitors, while some unusual class combinations gave very short junior winning times. Having said that, it must have been an extremely difficult job planning easy courses here.
Most people seem to have gone away happy, vowing to return if there is another event there. Incessant sunshine, the low-key organisation and the friendliness of the people all went to make a memorable orienteering weekend.
The Junior Squad ran a table quiz on the Sunday night, raising almost €600 for travel, gear etc. The DFO team won.
3ROC's Andrew Quin held off the foreign challenge to take the M21L trophy while Irish Champion Niamh O'Boyle (CNOC) held Ciara Largey (QUBOC) at bay in the chasing start to win the W21L class.
Results are available on the WEGO web site here and on the IOA site here.
JMcC.

Posted by John McCullough at 19:18